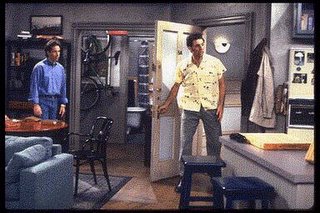 In this, the sitcom version of my life you’ve been watching, this is where it gets funny, this is where you start wetting yourself. The man from next door, the one with the thing, he comes in to ask if we’re still going to the game, except the other man, the one from the place, he’s already here and knows all about that, he’s been here the whole afternoon, since the thing with the brick and the salesman, which started so well and ended in comic disaster, with the blood on the bathroom floor and all, but by now the other man, the one no one likes, this third man comes in and wants to know when I’m returning that nail file of his, the one I’ve had for the last eighteen months, and he’s waving his hands in my face, and they’re filthy, really disgusting, and the first man is still going on about the game, the game!, we’re going to be late, and number two’s all hung up on that salesman, whatever happened to him, he’s in the cupboard or something, and the third man’s waving his nails around, which is when you come in, and how am I meant to fit four people in here? – I’ve only got two mugs and three teaspoons in the whole place the last time I counted, and do you know one another, I ask? And oh yes, number one tells you, you’re that guy with the thing, except he’s meant to be the guy with the thing, and you, you’ve met number two, that time in the hardware shop, with the garden gnome and the brick, another brick, what was all that about, and number three, he doesn’t know anyone, not even me, he’s in the wrong apartment, no one’s ever seen him before, so what is he doing with his feet on my sofa watching TV? And this is just the worst show ever, no one will ever say that catchphrase of yours, the set just visibly shook when you opened the door, I can’t read the autocue, and in fact the whole thing wasn’t just cancelled months ago, it never got past the pilot, it never even got to the pilot: get out of here now, the whole damn lot of you, out out out!
Posted by puthwuth at 21.1.06