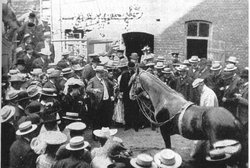 This is Clever Hans, a German horse and a dab hand (hoof) at sums. When asked a question he would tap out the answer with his hoof. A panel of scientists appointed to investigate found that, although Hans' powers were not a case of fraud, he could only solve a problem when the questioner already knew the answer. As he closed in on the right number of taps the questioner's body language displayed a decrease in tension, dissipating altogether when he got to the 'correct' tap, prompting him to stop. This effect, whereby the questioner unwittingly elicits the answer he wants to hear, is now known as the Clever Hans effect.

I mention this because in Watt Ernest Louit returns to Trinity College, Dublin, in the company of one Mr Nackybal, a native of the Burren. Louit has been researching a dissertation on The Mathetmatical Intuitions of the Visicelts, but has lost his notes in the gentlemen's cloakroom of Ennis Railway Station (not to mention being reduced to roasting and eating his dog). But not to worry, because Mr Nackybal possesses the ability to 'add, subtract, multiply or divide the smallest whole number to, from, by or into another', as Louit proceeds to demonstrate Clever Hans-style to the college's research committee.

They can't have been very impressed, as Louit moves on from mathetmatics to the much more adrenalin-charged world of trafficking 'Bando' (condoms, apparently).

Speaking of arithmetic though and Beckettian mistakes, as I was a few posts back: when Watt discusses the millennarian ambitions of the Lynch clan for their collective ages to add up to a thousand, a footnote points out that 'The figures given here are incorrect. The consequent calcluations are therefore doubly erroneous.'
Posted by puthwuth at 12.1.06

Horses have hooves not paws! Shocking to see such inacuracy.
A. Pedant

Ignorance, ma'am, ignorance, as Dr Johnson said when he had to explain why he got that bit of a horse's leg wrong in his dictionary. A pastern, I think. I know, I know, it's ducks that have paws, not horses.

Haven't quite got to the end of Watt yet but is "Bando" not a product claiming to cure impotence as mentioned on:

You are of course right. 'Bander' means to have an erection in French, hence the innuendo in the French title of Krapp's Last Tape (La Derniere Bande).