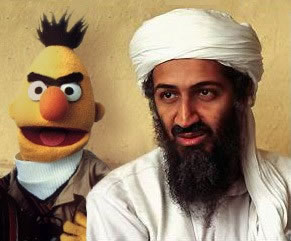 
Shouting, Hey you! You're a bit overweight! at a stranger.

Making a farting noise when someone sits down.

Tying a shoelace to a cat's tail.

Just some of the things you might consider evil if you'd been branded a 'Devil's Reject'. You're a devil's reject because you're the margarine of evil, the diet Coke of evil, not the chocolate chip cookie dipped in lard.

But the DVD copy of The Devil's Rejects in the bargain bin at my local Tesco's took an entirely different view of the question. These rejects were evil all right, and then some, what with all the torture and molestation and such. So why didn't the devil want them? Is this like a Stalinist v. anarchist thing? Something to do with unionisation and strike-breaking? Could there be a remake of On the Waterfront in there somewhere?

Then someone called Dino Ignacio came along and photoshopped Bert into pictures of well-known evildoers like Osama and put them on his Bert is Evil website. Before you know it Bert and Osama made an appearance on someone's demo placard in Bangaldesh -- someone who'd run Osama's name through Google images, wondered who the yellow guy beside him was but gone ahead and stuck it on his poster anyway. At this point the founder of Bert is Evil took the website down because it'd all got out of hand, and this former Ernie and Bert cuddly toy-owner (me) was suffering his definition of evil-crisis in the Tesco DVD aisle and longing for a return to simple the truths and certainties of a pre-September 11 world, but inwardly conceding that was impossible now that my precious Bert had been tarnished by that horrible website, and nothing, not even the two whole packets of Pringles I ate sitting there in the car park, nothing was ever, ever going to bring him back.