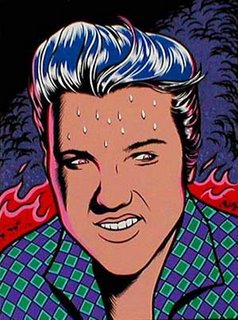 A Vegas stage adaptation of All That Fall? If you say so Colonel Parker!

In April 2003 a seven-year-old boy from Kazakhstan, Mourat Zhanaidarov, was admitted to hospital with stomach pains only for doctors to discover he was in fact 'pregnant' with his twin brother. The foetus had hair, nails and bones and was feeding off the boy's blood supply.

Elvis's twin brother Jesse died at birth, and while he failed to take up residence in the singer's alimentary canal he nevertheless had a profound effect on Elvis's life, if we can trust the comments of the King's guru Larry Geller, which we probably can't. This is after all the man who describes Elvis having a religious epiphany when the face of Stalin appears to him in a cloud in the desert. As Larry tells it:

"It's God!" Elvis cried. "It's God!" Tears streamed down his face as he hugged me tightly and said, "...I thank you from the bottom of my heart. You got me here. I'll never forget, never, man. It really happened. I saw the face of Stalin and I thought to myself, Why Stalin? Is it a projection of something that's inside of me? Is God trying to show me what he thinks of me? And then it happened! The face of Stalin turned right into the face of Jesus, and he smiled at me, and every fiber of my being felt it... Oh, God. Oh, God," Elvis kept saying.

And what connects all this to Beckett is his statement to Charles Juliet in 1968 that 'J'ai toujours eu la sensation qu'il y avait en moi un être assassiné.' He goes on to describe the lecture of Carl Jung's he heard at the Tavistock clinic he heard in 1935, and which inspires Maddy Rooney's speech in All That Fall, about the girl who had 'never really been born'. 'Never been properly born', as the addendum to Watt puts it. It's as if, in an improvement on the Kazakh boy and Elvis's predicament, Beckett and his characters are the dead twins.