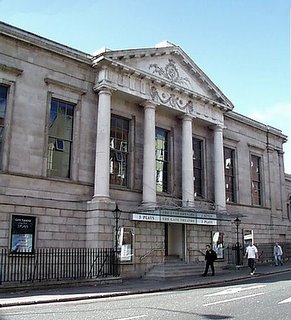 Asked by Mary Manning to help out with her play Youth's the Season at Dublin's Gate Theatre (above) in 1935, Beckett contributed a character called Ego Smith. Here's a snatch of Smith's part as quoted by Deirdre Bair: 'My conception of the universe is a huge head with pus-exuding scabs -- entirely revolting.'

When Ego Smith failed to go down well the producers, Beckett suggested an offstage character who would spend the play repeatedly flushing a toilet.

The Gate Theatre is not to be confused with the Abbey, especially not with the Abbey toilet or 'necessary house', down which Murphy asked his ashes to be flushed in his will, 'if possible during the performance of a piece.'

Later in life she became Mary Manning Howe, mother of the poets Fanny and Susan Howe.
Posted by puthwuth at 22.1.06