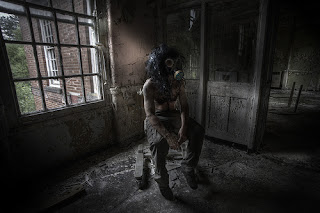 I want to go to hospital, screams a demented woman several rooms down from me on the ninth floor of Hull Royal Infirmary. I want to go to bed, groans the elderly man opposite me from his bed. Tom Paulin once described Hazlitt’s prose as ‘taut and flaccid’, and there is something simultaneously loose and pinched about my room-mate’s exposed chest, Zurbaran’s St Jerome-meets-late-period Iggy Pop. I have been sequestered on presenting in the maxillo-facial unit (Max Fax to its friends) for an abscess on my jaw, courtesy of a recently removed wisdom tooth. In Larkin’s ‘Ambulances’, any street corner becomes the entrance to the pit of doom, via the speeding vehicles’ deathly portals. Here in hospital, by contrast, power resides with the lift. Though I’m free to move around and do as I wish, the distance down to the breezy café by A&E, there to contemplate a melancholy cheese roll or a community art installation, is well beyond my willpower. Asked once too often for my name and date of birth, I reply with ‘My name is still David Wheatley and I was still born on 16 August 1970’, before realizing how that might sound. An all too appropriate mistake, under the circumstances. For company, when not scanning posters warning me of the dangers of ‘anal fishers’, I have, as it happens, Archie Burnett’s new edition of Larkin, which identifies his ‘Building’ not with the hospital I’m currently occupying but the now-demolished Kingston General, whose Victorian pile can hardly have made much of a ‘clean-sliced cliff’. Regardless of location, the mountaineers crouched below ‘extinction’s Alp’ maintain their skyward trudge with the same weary resolve on show in Larkin’s poem. Whether talking about their illness or not, whether in blind screaming panic, devouring a monster bag of Doritos or entering a state of auto-embalmment (my room-mate has gone mercifully quiet), my fellow passengers in this frail travelling coincidence are unified only by illness and death. A conversation about liver cancer is a conversation about death, but so is a conversation about what’s on the telly later and whether there will be ice-cream with dinner. But worse again, it strikes me, is not how much more panicked or urgent conversations in hospital are than down the bookie’s or over the Morrison’s salad counter, but how greyly and utterly the same they are. The film of death-awareness spreads dully over every other conceivable activity: putting the bins out (you will die), feeding the cats (if not now soon), posting a letter (of something painful and lingering). Having covered the whole of existence, though, it collapses in on itself and effectively vanishes again, and all of a sudden my hospital stay takes on the inoffensiveness of anything else I might be doing instead: shopping for mushrooms (who wants to live forever), catching the no. 13 bus (I probably won’t feel a thing anyway), queuing outside the post office in the rain (goodbye cruel world).
Posted by puthwuth at 21.1.12 3 comments