Roadsign Sticker Knows Something I Don't 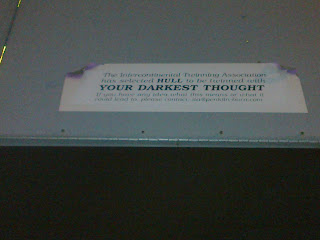 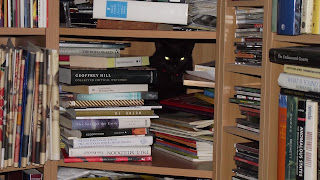 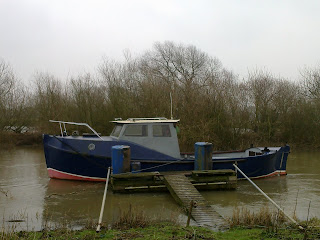 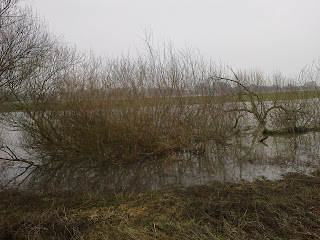 Labels: Also home to the Ferryboat Inn Camra Yorkshire Pub of the Year 2010 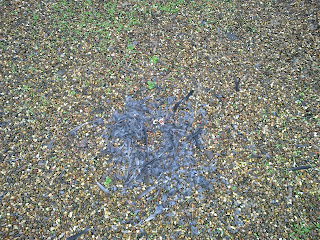 Labels: Kestrel sitting in this in back garden this morning 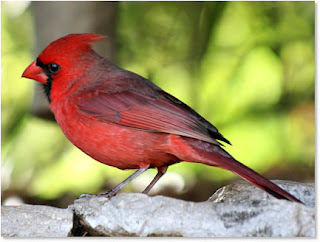 How embarrassing to contemplate the dose of the blog yips I’ve come down with. Some random jottings from a recent trip to the States by way of apology.

1) Taking one of those flights where next month’s crappy bargain DVD is playing on the back of the seats, I found myself painfully drawn into the world of a stinker called Morning Glory (no sniggers please), featuring Harrison Ford and Rachel McAdams. The point of the film is that grouchy old guy resents being on morning TV but eventually changes his mind, presumably out of some not-quite-articulated desire to BONE Rachel McAdams the minute he gets the chance, perhaps during a commerical break. But given that the flight was long enough for the film to go round four times, and the woman a few rows ahead of me decided to sit through it (asleep, I hope) every single time, I found myself unable to avert my gaze. Is that the awkward first date with boyfriend? The awkward first sex, except (phew, PG rating!) it gets averted by an urgent work message? The row with the boyfriend? And on it went for hours and hours. Whoever you are, please stop making these films.

2) I notice Officer Dickhole is still on jaywalking duty, where I presume he has spent the six or seven years since I last got whistled at for trying to nip across between cars.

3) How odd to walk around the Lincoln Memorial and then Arlington Cemetery and find them deserted. The latter until a military funeral turned up, with coffin on horse-drawn tumbril, and emergency supplies of the flag everywhere I looked, in case of unexpected patriotism deficit. The graveyard is pleasantly rich in waxwings, cardinals and mocking birds, one of whom performed the trick of swallowing a berry then bringing it back up then swallowing it again. There also appear to be some historical noteworthies buried there.

4) The phrase ‘content farm’ has been bandied about a lot in the last few days, à propos the sell-off (sell-out) of the Huffington Post, but what the AWP book fair, and the system behind it, are if not a ‘content farm’, I don’t know.

5) American books still smell a lot nicer than British and Irish ones.

6) There is no real point in talking about a reading in the States by Eavan Boland, except to say: if every poem I wrote, and every introduction of every poem I was reading, led me back as repetitively as hers do Eavan Boland to yet another story about the ould sod, I would apply for Angolan citizenship, arrange for one of those memory wipes they have in Men in Black, or whatever it took. Whatever. It. Took.

7) I’ve always wondered whether those scrunched-up sections in Susan Howe books were the result either of a lifelong admiration for ditto in Peter Reading’s books or the result of a malfunctioning typewriter ribbon. But having now heard her read one out, I feel enlightened. It was like hearing That Time or some other late Beckett dramaticule.

8) SH misspelt the word ‘niece’ ‘neice’ when she inscribed a book for me. My theory is that this is down to the gravitational force of the spelling of Charles Sander Peirce’s name, given her interest in him. Am I right, I wonder. The reason why she was using the word ‘niece’ by the way is that I own a book that belonged to her uncle, Mary Manning’s brother John.

9) Stephen Dunn is such a decent chap. So well-adjusted and self-deprecating. I wouldn’t want to be his left-hand margin the day he goes nuts and launches into Language poet act-out mode for all that pent-up rage, before being tranquillised with a dart in the neck from Richard Wilbur or Billy Collins.

10) Why only one shouty disturbed guy outside the White House? I would have thought lots or none. Tattoos on face never a good idea unless a) auditioning for part of Queequeg in adaptation of Moby-Dick or b) trying to fit in in some of the rougher pubs on Hull estates.

11) As the name on her website would suggest, I am assuming poet Aimee Nezhukumatathil has business cards that read ‘You may call me Aimee Nez’.

12) Why is Tony Hoagland so embarrassing?

13) Irish poets in the States get the chance to rediscover themselves as born-again Irishmen/women. But what about Brits? Deprived of the ethnic route, what do they do but – in those rare cases where they are published over there – rise without trace (Glyn Maxwell)? Or get taken up, if they’re James Fenton, by Dana Gioia and his merry band of New Formalists?

14) Rae Armantrout gets lots of junk mail about funeral services, including offers to ‘Win a Cremation’.

15) Impressed yet again with the bizarre rituals of US news anchor banter, I would like, one day, to stage a pre-scripted conversation in a café/pub/other public space in the same style, to the optimal discomfort of all around me.

16) In that amusing book of hers, which I notice Granta have just brought out over here, Elif Batuman paints a convincing picture of a culture war between the MFA and the PhD in American academe. Attending the AWP (which is what I’m talking about here, by the way) left me no less sceptical about the institutionalisation of creative writing in American academe, and the victory for the MFA side of things it represents. For instance, there was a panel at which some writers from the Iowa program talked about, well, being writers from the Iowa program. But what a strange thing to do, I thought. Do academic critics sit around onstage and talk about ‘being’ academic critics (that insistence again on writing as a state of being: I am a writer)? For those on a lower rung of the greasy pole than the folk from Iowa, which was many, there was more of an accompanying need to justify or theorise the business of creative writing. But this did not notably overlap with a commitment to, or even any kind of acknowledgement of teaching literature, at all. In one hilarious paper I ended up walking out of, someone spoke at length of the need to study process rather than product, product meaning apparently the finished documents otherwise known as books, for which he seemed keen to substitute the study of, among other things, the physical movements of writers during the act of composition. Process, not product. No reference was made to any writers, to any writing whatever. I am not making this up. How institutions of higher education feel this kind of thing constitutes an advancement of learning I have no idea.

17) Forrest Gander remains my favourite farmyard-animal-based name for an American poet. And is also a fine poet. I was most moved by his reading of George Oppen’s ‘Psalm’, one of my favourite poems.

18) Dulles Airport is about on a par with Doncaster Railway Station for non-meat-based foodstuffs.

19) I also saw a sunbittern, though not the sun on his back (when wings are fully extended).

20) Miller Lite has to be the most embarrassing excuse for a beer on the planet.

21) Morning Glory sadly not showing on the return flight, but it did have a film about a runaway train, which unless stopped... unless stopped one, two, three times in a row over the course of the flight... (and, snip!)
Posted by puthwuth at 19.2.11 8 comments