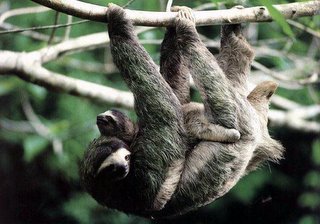 ‘My absolute favourite piece of information is the fact that young sloths are so inept that they frequently grab their own arms and legs instead of branches, and fall out of trees.’ (Douglas Adams)
Posted by puthwuth at 29.10.05 0 comments 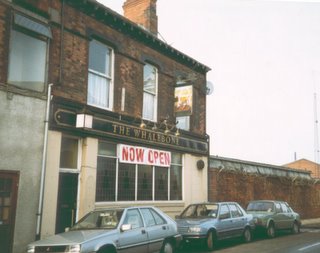 In Moby-Dick Melville describes the skeleton of a sperm whale washed up on the north sea coast and claimed by the Lord Paramount of the Seigniory of Holderness: ‘Sir Clifford’s whale has been articulated throughout; so that like a great chest of drawers, you can open and shut him, in all his boney cavities – spread out his ribs like a gigantic fan – and swing all day up on his lower jaw. […] Sir Clifford thinks of charging twopence a peep at the whispering gallery in the spinal column; threepence to hear the echo at the hollow of his cerebellum; and sixpence for the unrivalled view from his forehead.’

"I, too, dislike it," are the immortal beginning words of Marianne Moore's poem "Poetry", and they seem to me to be the only possible credentials for a poet and a reader of poetry. I sometimes wonder if there are any poets who "like" it, and whether I would like them.

“It’s very difficult to get rid of diarrhoea once it starts.” (Colm Tóibín, The Blackwater Lightship)
Posted by puthwuth at 27.10.05 0 comments

Johnson had said that he could repeat a complete chapter of The Natural History of Iceland, from the Danish of Horrebow, the whole of which was exactly thus:- 'Chap. lxxii. Concerning Snakes. There are no snakes to be met with throughout the whole island'. (Boswell, The Life of Samuel Johnson)
Posted by puthwuth at 26.10.05 0 comments 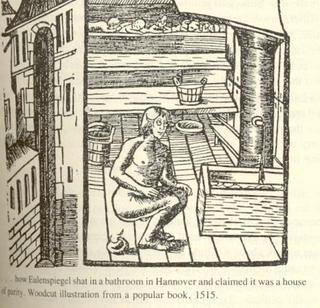 Speaking of arses: Till Eulenspiegel's appearance on a 16th century pilot of How Clean is Your House comes to an unfortunate end.

Woodcut from Peter Sloterdijk's Critique of Cynical Reason, a volume close to our heart. And our loo.
Posted by puthwuth at 15.10.05 0 comments

Look at these
Seeing you makes me want to lift up my top,
breathe in and say Look! Look at these
I've kept them hidden till now
under loose shirts, Dad's jumpers.

Suddenly I'm offering them
like a woman ready to mate.
I'm holding my breath.
Don't tell me not to.

Look at this
Seeing you makes me want to pull down my stretch pants
breathe in and say Oy! Look at my arse
I’ve kept it hidden until now
under the back of my hoodie, these kecks.

Suddenly I’m offering it
like a drunk mooning a schoolbus.
I’m holding my nose.
Don’t tell me what to do with my arse.
Posted by puthwuth at 15.10.05 0 comments

Are you a pre-clear enturbulated theta? Maybe you should read this Scientology glossary and find out.

I Hate the Human Race 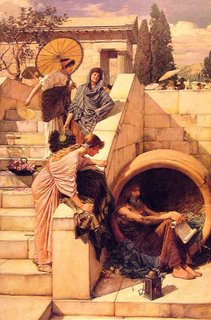 Adrian Mitchell adds: 'Human Beings is a poem for peace. It is about the joy of being human, but that doesn’t mean that it’s against animals or alien beings. When it goes into space and it’s read by aliens, I’d hate for them to think that it’s anti alternative life forms.' Consider the Venusian counterattack called off then. For the moment.
Posted by puthwuth at 13.10.05 0 comments

Hallelujah!
It works.
He impressed the shit out of them.

Praise the Lord for all good things.

(Not including Pinter's poetry then,
which isn't much cop.)

Now I want George Bush to come over here
and kiss him on the mouth.

Sir Arthur Streeb-Greebling: Yes, the Streebs originally hailed form Iceland – or Norway, as it was then, and what is now modern Denmark. Streeb is in fact a corruption of the original Norsk name Struwb.

Ludovic Kennedy: Does that have any meaning in Norsk, in fact?

Sir Arthur Streeb-Greebling: It means Struwb in Norsk. It’s almost impossible to translate, really. It basically means a sort of wooden bucket with two holes in it. Underwear, really – wooden underwear, which is the only sensible way to deal with the cold Norsk summer. You just take off your underwear, set it on fire and huddle round it for warmth.
Posted by puthwuth at 12.10.05 0 comments

You Always Knew I Had This Gun 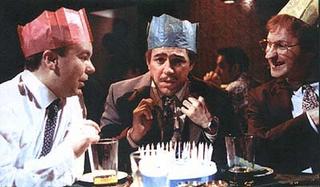 Georgiasam celebrates finding the light switch (see 'You Know I've Got This Gun Don't You'). But I still love I mean hate Mike. I definitely hate Brian though.
Posted by puthwuth at 12.10.05 0 comments

When I’m called to serious accident scenes, as I am every week, and I see a dent like this in the car roof I think, You may as well call the hospital now and say Stop, it’ s not worth it. She’s dead.

[Thankfully the woman in the safety film was in fact jumping over the car, not colliding with its bonnet. The dent in the roof was caused by the briefcase she was carrying.]

I feel like going down to the hospital and saying Stop treating this woman’s injuries. She’s not just seriously injured, she’s not just a vegetable, she’s dead.

[After dusting down her business suit, the woman was able to continue on her way to work, even managing to arrive on time.]

In fact I’m going to grab the plug for that life-support machine and yank it out of the wall right now.

[Joking about the incident with her colleagues over the photocopier, she is now looking forward to lunch with a man from the estate agent's across the road. As long as he doesn't get knocked down crossing it! Joke!]

Ah, Chervonooskilske Vodoskhovyshche, are you as when I saw you last?
Posted by puthwuth at 11.10.05 0 comments

I Am Your President 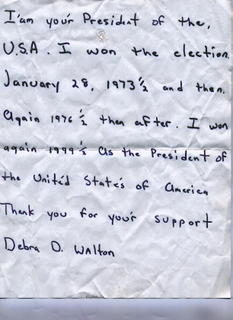 I Am Your President.


And that's enough Ubu for now.

Terrorist head to sit on body. 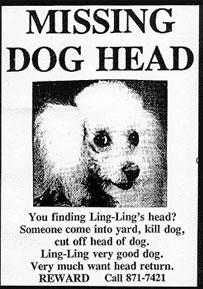 I've learned from my mistakes. In fact I could repeat them exactly. (Sir Arthur Streeb-Greebling)
Posted by puthwuth at 10.10.05 0 comments

Modernising opinion, however, advocates the phasing out of the nmbti. Sarcastic liberals have taken to wearing a mock nmbti coated in velcro, so that on the performance of the traditional male nose-kiss greeting they are able to snare and bear off the other nmbti, leaving the other man helpless to retrieve it as he sinks to his knees and hides his face in his hands.

The situation is serious, but not an emergency (yet). No one wants to return to the dark days of the nmbti riots of 1972.

The female nose women can stick anywhere they want. No one cares about that.
Posted by puthwuth at 10.10.05 0 comments

Chewing Gum for the Eyes

Father Dougal: No thanks Ted, I've got these crisps here.
Posted by puthwuth at 10.10.05 0 comments

You Know I've Got This Gun Don't You

Georgiasam wonders if his friend Mike is just being tactful about his little wind problem, or whether he's right about Mike hating him and had better get on with shooting the bastard right now. 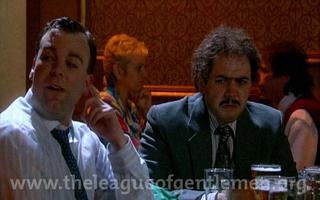 'It's never Rover' (Jeff Buckley, Lover, You Should Have Come Over)

Jeff Buckley's dog ran away. He used to sit in his porch waiting for her to return, but she never did (strange choice of name for a bitch, I agree). It's all very sad.
Posted by puthwuth at 9.10.05 0 comments

'Don't be like the one who made Miso' (Jeff Buckley, Dream Brother)

Little-known fact: Jeff Buckley nursed a deep grievance against a Japanese chef and his miso soup in particular, as expressed in the above lyric.
Posted by puthwuth at 7.10.05 0 comments

Possibly the Worst. Poem. Ever

Blessed Be the Paps which Thou Hast Sucked

Suppose he had been tabled at thy teats,
Thy hunger feels not what he eats;
He’ll have his teat ere long, a bloody one,
The mother then must suck the Son.

(Paul Whitehouse, on the death of Spike Milligan)

A delegation of US Congressmen came to visit Leningrad once. They were being met by the First Secretary of the Leningrad Region Communist Party, Tolstikov. And so the exchange of views began. One of the Congressmen in passing asked Tolstikov: ‘And what are the mortality rates for Leningrad?’ Tolstikov replied assuredly and sharply: ‘In Leningrad there is no mortality rate!’

"There are at least 1 million poets across China," says Sun Yiqing, president of the China Poets Society.

"Poets are best known for their strong passion and in most cases, agony." 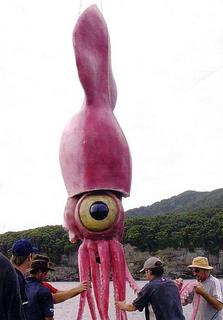 Georgiasam endures the unwelcome attention of gaping locals on a recent sun and sea holiday.
Posted by puthwuth at 2.10.05 0 comments

Two hedgehog WMD inspectors in the desert. One says to the other --

The next instalment is called Colourblind Bunny. An eight-foot tall bunny is standing impatiently at a pedestrian crossing, despite the clearly visible green man. In the second panel the signal has changed to red, and in the third he is lying under a bus.

That's the name of a new cartoon strip I've invented.

In the first strip two echidnas are poring over a trigonometry problem. You can see it's a maths book and you know from the title it's trigonometry, right? They do that for three panels, looking puzzled, and then in the fourth one echidna says to the other, 'Dude, I think you meant Sine, not Cosine.'

You have to think about it for a minute, and then you laugh. Except you are wrong: it's not funny. I just did that to test you!
Posted by puthwuth at 1.10.05 0 comments

+ scroll down to link.