Breakfast Will Not Be Served After Lunch 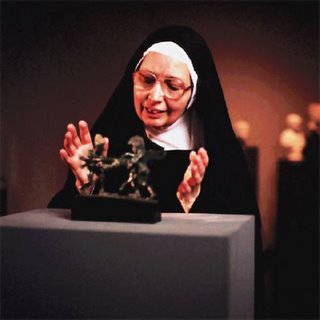 This is toothy television nun and consecrated virgin Sister Wendy. Consecrated virgin is to virgin what extra virgin is to virgin olive oil, I'm presuming. She rises between one or two in the morning. I mention that because, as a reader of George Szirtes's blog, I notice how his hour of rising keeps getting earlier and earlier. These days it's 3am.

If someone gets up at the same time I go to bed, who is up early and who is up late? I worry about these things though not, be it said, to the point of losing any sleep. I rarely go to bed before two in the morning and rarely rise before eleven the next day.

The idea of confusingly overlapping timezones reminds me of a sign in an Irish B&B: 'Breakfast will not be served after lunch.' 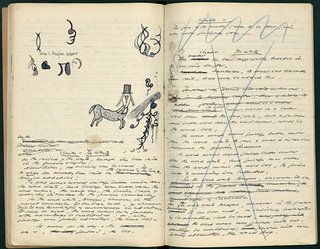 A Cartesian centaur, I presume. From the Watt manuscript at the Harry Ransom Centre.
Posted by puthwuth at 30.12.06 0 comments 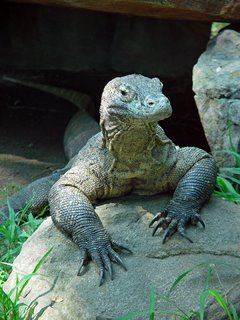 Flora the Chester zoo Komodo dragon has delivered herself of a virgin birth.

For God so loved the world, that having already used up his one son he sent an outsized Indonesian novelty living fossil.
Posted by puthwuth at 21.12.06 0 comments 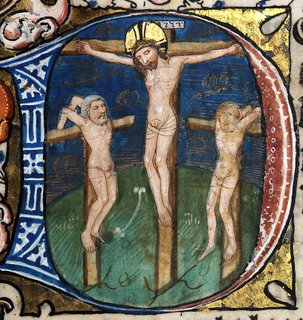 1) ‘Not count! One of the few satisfactions in life!’ Dan Rooney expostulates indignantly in All That Fall. He wouldn’t have derived much satisfaction from the eighteen by fifty metre cylinder in the John Calder printing of The Lost Ones whose surface area is a paltry 80,000 square centimetres. Revising the height downwards from eighteen to sixteen, Beckett managed to bring the dimensions back in line with the correct twelve million square centimetres of the original Evergreen Review printing.
2) Still on the theme of innumeracy, ‘The figures given here are incorrect. The consequent calculations are therefore doubly erroneous’, we read in a footnote to Watt of the Lynch clan and its sadly unrealized millennial ambitions.
3) ‘Atlas, son of Jupiter’ Pozzo exclaims in the original text of Godot, where we now read ‘Atlas, son of Japetos’, someone having pointed out the mistake to Beckett.
4) Also in Godot, Vladimir errs in his memory of inconsistency in the gospel accounts of Christ and the thieves. ‘Only one speaks of a thief being saved […] Of the other three three two don’t mention any thieves at all and the third says that both of them abused him’, he says. Except that while Luke has one good thief and Matthew two bad ones, there are two silent thieves in Mark, and two men (not described as thieves) in John.
5) Christopher Ricks notices this one in Beckett’s Dying Words: that the ‘Grave’s disease’ mentioned twice in Murphy is in fact ‘Graves’ disease’. How hideous is the misplaced apostrophe.
6) The seven scarves quoted in the opening of Murphy, when only six are enumerated, not to mention the fact that tying one behind one's back is a physical impossibility: that's all just to make sure you're paying attention.
7) Is this a mistake? The narrator of Enough is identified by Martin Esslin and Vivian Mercier as a woman, between his references to penis-licking and breasts, but in the original French text Assez Beckett wrote ‘Si je m’étais retourné je ne l’aurais pas vu’, indicating that it’s a man. If this did strike him as a mistake, he corrected it by ungendering the sentence to ‘En me retournant je ne l’aurais pas vu.’
8) A Deborah Warner production of Footfalls was halted by the Beckett estate in 1994 for the athletic off-piste antics it handed to the normally foot-dragging May. However, where the original text specifies seven steps before she turns around, Beckett later fixed on nine. In Collected Shorter Plays he forgot to bring V’s step-counting in the text into line with the diagram of the nine steps, but all attempts by the Beckett estate to have Beckett's own productions of the play retrospectively banned for tampering with the script have come to nothing.
9) Very late in life Beckett contributed to a project called The Great Book of Ireland, which involved him copying the four lines of 'Da Tagte Es' onto vellum for the delectation of Charles Haughey and other political flunkeys back at home, but in his weariness/confusion/temporary (soon to be permanent) failure of the will to live, Beckett got the lines in the wrong order. Mistake though this was, it was as nothing to the trumpeting that followed of the quatrain as 'Beckett's Last Word', when it was obviously no such thing.
10) There's lots of back-and-forth 'he said'/'he said' dialogue in Mercier and Camier, so it's hardly a surprise that Beckett loses trrack of who's saying what, as he does on page 74 of the Calder edition. Camier has ventured out to test the rain:

Well? said Mercier.
Don't rush me, said Camier.
He advanced to the corner of the street, in order to reduce the risk of error. Finally he regained the porch and delivered his considered opinion.
In our shoes I wouldn't, he said.
And may one inquire why not? said Camier.

Unless Camier has taken to talking to himself, I'm assuming that last 'Camier' should be his partner in pseudcoupledom, Mercier.

And finally, not a mistake in Beckett, but revealing none the less. Looking for references to mistakes in Beckett I noticed a reference to this ‘craze for explication’ (from Catastrophe) in a 1994 Contemporary Fiction article by Therese Fischer-Seidel. Except that it’s a craze for ‘explicitation’, not ‘explication’. You never can be too careful!
Posted by puthwuth at 20.12.06 0 comments 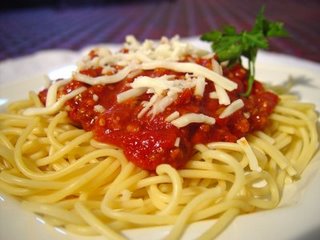 Am debating whether that tops my previous favourite restaurant trouvaille, 'aubergine stuffed by a nut.'
Posted by puthwuth at 16.12.06 2 comments 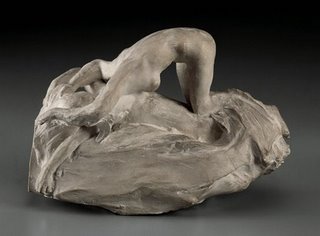 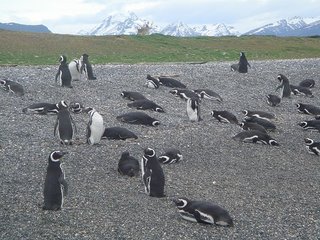 PS Penguins do not crane their necks backwards and fall over when they see planes passing by. Or at least it says they don't here. They do, however, fall over when recruited for a game of penguin skittles, which I presume, privileged witnesses that we are, is what's going on above.
Posted by puthwuth at 14.12.06 0 comments

Gut of a Bloated Swine 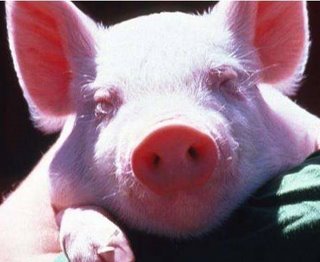 I was reading a student essay the other day about poetry on the internet and came across the following sample, from a poetry site called Aha! (supply Alan Partridge joke here). It's about childbirth, apparently:

Partitioning your legs in fever,
Like the gut of a bloated swine,
But your chops has [sic] breathing machinery in it,
Not a cherry red apple,
And you are not basted in apple sauce,
But the sweat of your pores.
Posted by puthwuth at 14.12.06 0 comments 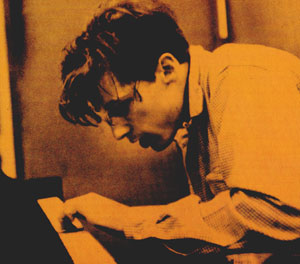 A poem, for Peter Riley, is ‘an object between poet and reader which is both a means of communication and a barrier to communication’, ‘neither opaque nor transparent’, a ‘body of light’ reflecting ‘the need to say and be revealed crossed with the need to remain silent and secret’. Glenn Gould suggested that the audience is to the artist as one is to zero, and in an appreciation of little-read 40s poet Nicholas Moore Riley goes further: ‘If poetry in this place is to have any half-decent future, it will have to be withdrawn completely from public view.’
Posted by puthwuth at 11.12.06 0 comments 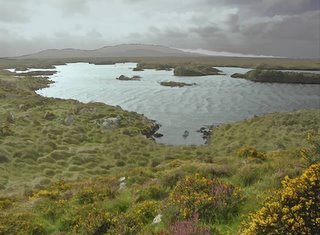 A riddle from Tim Robinson's Connemara: Listening to the Wind, a book I've been reading slowly, lingeringly:

Téann sé isteach ar ghuaillí daoine agus tagann sé amach ina shnáithín síoda – ‘It comes in on people’s shoulders and it goes out as a thread of silk.’

Answer in the comments stream.
Posted by puthwuth at 10.12.06 3 comments 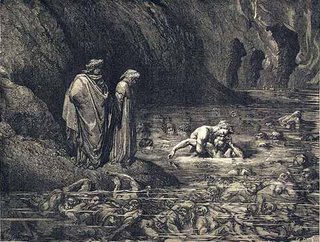 Eric Griffiths chews on Sean O'Brien's brains and spits them out.

On the subject of there being no hills between Pisa and the sea, Stephen Dedalus looks at Bray Head from the tower in Sandycove in the first chapter of Ulysses, except he can't possibly do so; Killiney Head is in the way. He must taken taken a terrible brain-chewing over that from the books desk of the Freeman's Journal or the Wicklow People back in 1922.
Posted by puthwuth at 9.12.06 2 comments 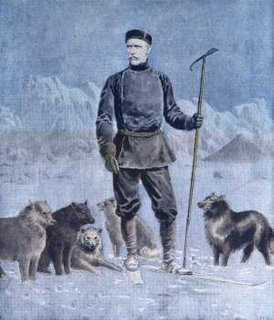 Is that the word? For dog-eating?

Reading Among the Christians sent me back to Empson's Christian-baiting essay on 'The Rime of the Ancient Mariner', where I picked up this tidbit:

Take the philanthropist Nansen; all teams such as his had a schedule for eating the husky dogs who pulled the sledges, so that each time a sledge became empty, as the men and dogs ate the food on the sledges, there were no husky dogs to pull this useless sledge. I bet all those dogs loved Nansen like crazy.
Posted by puthwuth at 9.12.06 0 comments 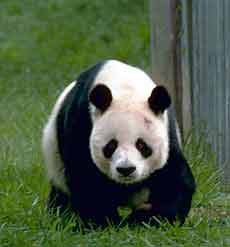 Jonathan Watts describes some panda sex tricks in The Guardian:

Another challenge was the risk of in-breeding. To widen the genetic stock, researchers had to come up with a way to find a mate for even the least popular females. How did they do that? "We tricked them," Zhang says with a smile. The "trick" is to put a fertile and attractive female into a breeding pen, where she leaves scratchmarks and droppings capable of exciting a male. But at the last moment the females are swapped. The zookeepers introduce a new, less popular, mate who has been scented with the urine of the more attractive animals. She is introduced into the mating pen rear end first, so the male cannot see the face of his partner until after they have finished copulating. "When the males find out, they get very angry and start fighting the female," Zhang says. "We have had to use firecrackers and a water hose to separate them."
Posted by puthwuth at 9.12.06 2 comments 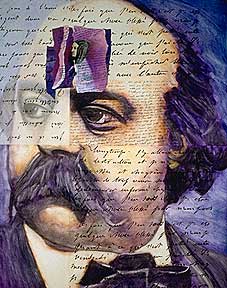