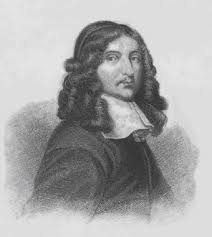 Below a short story (of a kind) on Andrew Marvell’s ill-fated trade mission to Russia. I’m prompted to post by the discovery that Matthew Francis has devoted the title sequence of his new book Muscovy to the same subject. But my own inspiration entirely independent, let me hereby insist. {Waffling intro ends.}

Nay, Sir, as Mr Milton has lately argued on the Popish question

A distant prospect of th’ingested vomit of the sea, otherwise Holland

A beluga, do you say! The Academy will hear of this

Arriving in Archangel, Carlisle was apprised of the withdrawal of the copper coin in the Muscovite duchy and addressed a missive on this subject to the court

The following thousand miles we travelled in six barges pulled by serfs, as is the custom of this land

It being Guy Fawkes Night Midshipman Niblett did endeavour to dance a hornpipe on the ice, to general hilarity

Thou heathen slave!, Carlisle’s rebuke to the Muscovites who saw in him, he wrote, an idolatrous likeness of the image of His Majesty himself

A period of some three months’ idle waiting

[The next half hour’s remarks in Latin]

The frolicsome blockhead’s effrontery I threw back in his face, demanding redress

Standing hatless in the sled, bearing the ambassador’s credentials on a yard of damask

Czar Alexei then appearing entirely covered in jewels, a magpie’s nest of his despot’s gewgaws

A boyar holding the despot’s hand while we kissed it, that his master not be put to any effort

For ‘Illustrissime’ in the address read ‘Serenissime’, complained the despot

Five hundred dishes served continuously for dinner yet, what’s this, trade privileges not restored? By the Turkoman’s beard!

The Stockholm interlude, the review of the Swedish fleet and the prototype submarine

An affray with a Hunnish wagoner, pistols drawn, and my rescue from a barbarous rout of peasants and mechanicks, my poor little page tossed up and down in the air

Your Majesty! We have not been idle these past nineteen months

In the matter of the boundary fence alongside Mr Chadband’s yard, I recommend it be moved one foot to the left and not one word more be said on this tawdry affair