Down With Creative Writing (Again) 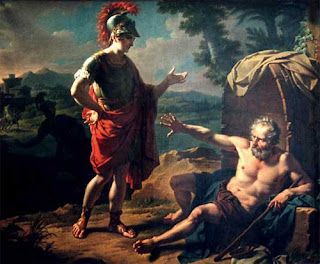 Hill declared his scepticism towards Creative Writing courses, arguing that if there is someone ‘out there’ working at a pitch equal to the demands set by the history of poetry ‘she will know who she is’ without interference. In a cognate swipe at contemporary hustle and self-inflation, he announced that for the time of his incumbency as Professor of Poetry he would not be using the office to promote his own work in the university by readings or otherwise.

Without going all Diogenes-in-his-barrel over this, the ethics or otherwise of Creative Writing is something I have frequent reason to ponder. When I was a student, and still receiving a fairly Leavisite education, many people feared theory was going to destroy English studies. Theorists would declare Jane Austen were in fact all about the slave trade, lesbianism or the transcendental signifier, no matter what the author may have thought she was doing. How shocking! Whereas nowadays the thought of a postcolonial theorist who still wanted to read Jane Austen rather than take her off the course in favour of (insert name of ignominious stand-in here) will seem almost quaint, in many quarters. Yes, I witnessed my share of scraps and scrapes over the canon back in the 90s, over the emergence of Irish Studies as an academic subject, over whether Camille Paglia had committed a sexual assault on Emily Dickinson’s poetry, and whether seminars on Beowulf should revolve around discussions of Derridean theory (answer: em, no). But what I have seen in more recent times (to hark back to Hill’s comments) is something else entirely: the replacement of the canon by the press release. The important writers are whoever has just won a prize or had a press release sent around about how important they are. Academics become panders, would-be go-betweens for the publishing industry, who – well, as if they care whether their writers have got a creative writing degree or not. Students do not know about literary history because they need not know, because the worldview that informs their courses has dispensed with, eviscerated it. There has to be a right way and a wrong way of doing Creative Writing (and of course there are still some righteous souls to be found, here and there...), but my instinct is that the wrong way has largely won, and what it has led to is not something I recognise as tertiary education, and I heartily wish it would go away and not come back. It is the death of the critical faculties, the death of the mind. 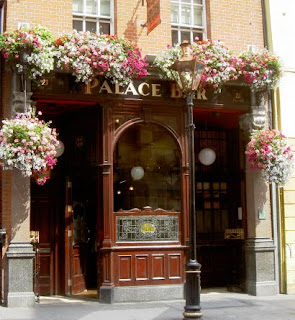 Brian Ó Nualláin/Brian O’Nolan/Flann O’Brien/Myles nagCopaleen/whatever his name was is a hundred this year. Having, like the inhabitants of Corcha Dorcha, long since taken the bád bán to pursue my career as a pratie-hoker in Siberia, I would normally look on as a lachrymose and sea-divided Gael when festivities like this occur. But no, I shall be there. The Palace Bar, 1 April 2-6. Dress code ‘Emergency chic’, I read.

Rummaging round the Mylesday site we find this:

“Thank you very much for your kind invitation to speak at your Myles Day on the 1st of April next. It sounds like a great idea and may I congratulate you on it. However while I would be interested in participating I have checked my diary and see that I am already engaged to take part in a series of events that day so will not unfortunately be able to attend.”

“May I wish you the very best of luck with what I know will be a great success.”

The Brother for President! Pints of plain all round!
Posted by puthwuth at 26.3.11 0 comments 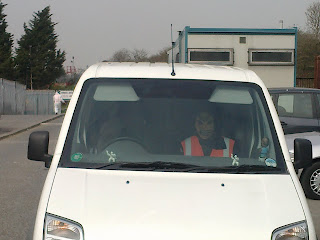 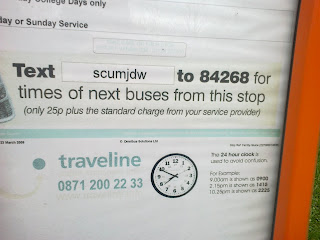 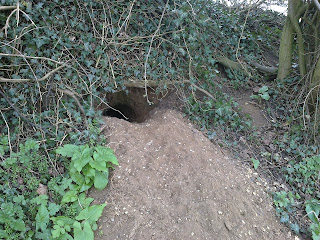 Does my post like thin in this (format)? Some labels from the enterprising and always eminently drinkable East Yorkshire brewery at Great Newsome. Maddeningly low-resolution but, still. A pricky back otchan is a hedgehog, needless to say. Full range available to peruse here. Quality ales all. 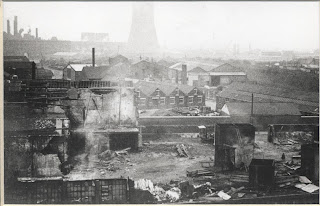 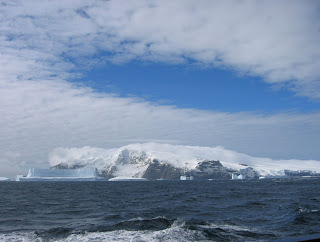 Lonely Island, where ‘The evacuation order came today. Pouring the water out. Turned off diesel. The station is...’ (illegible).

Bear Island, whose tallest peak can be found in the Miseryfjellet district.

Brava in the Cape Verde Islands, to whose silky chanteuse Mayra Andrade I say brava, bravissima.

St Helena, a witty palindrome for which exceeded Napoleon’s abilities, after his sterling efforts in Elba.

Bouvet Island, the mystery of whose empty boat will never be solved (who went there? why? where did they go?).

Southern Thule, covered in ash and penguin guano but planted with a Union Jack somewhere amid the rubble of a derelict weather station.

Saint Paul Island, where a group of Bretons and Madagascans were sent to establish a spiny lobster cannery in the 1920s then abandoned when the company went bankrupt, spending six years there before the survivors were rescued.

Possession Island, where the river Styx flows into the sea.

Christmas Island, home to warring hundreds of millions of crabs and ants.

Tromelin, named for the Frenchman who rescued its abandoned shipwrecked slaves.

Napuka, or Disappointment Islands, with never a bite to eat or anything else to deflect a boatload of Portuguese sailors’ thoughts from cannibalism.

Rapa Iti, which mystically called, in a language he could never have learned, to a French boy half a world away, haunting his dreams: a call the boy, Marc Liblin, somehow contrived to answer, meeting a Rapan woman by the purest of chances and going to live there; an entirely unbelievable yet, it seems, true story.

Robinson Crusoe Island, where Alexander Selkirk was shipwrecked, rather than on (more naturally, wouldn’t you think) the nearby Alejandro Selkirk Island.

Howland Island, almost but never quite reached by the ill-fated Amelia Earhart.

Atlasov Island, whose ‘atlas of’ lends itself to a very obvious pun.

Norfolk Island, where, no, please, God no, please no, its convict inhabitants would yell, groan and cry.

Floreana, whose utopian German community in the 1930s got up to much murderous mayhem contributing to the extinction of the indigenous mockingbird.

Banaba, whose islanders practice exposure of the dead rather than burial, and were treated with barbaric cruelty by their Japanese occupiers during the war.

Campbell Island, site of a splendidly pointless scientific expedition in 1874 involving a trip all the way from France to see something that ended up being blocked by a cloud.

Pingelap, home of the colour-blind.

Semisopochnoi, where the foxes are blue.

Clipperton Atoll, good grief, what a story (smash him! smash his face in!).

Raoul Island, where the New Zealand insists on sending volunteers for year-long residencies, quite why I cannot make out, never mind what they do there.

Socorro Island, home to a large pig population despite the absence of fresh water.

Iwo Jima, the iconic photographic image of which was in fact staged.

Pagan, where ‘they say the volcano is not dangerous’ (not anymore they don’t).

Cocos Island, where they still ain’t found that treasure.

Takuu, where you’d better have a pair of wellies handy.

Laurie Island, where the ‘pride o’ oor land lies cauld in the clay’.

Franklin Island, which commemorates a man who never went there and died in the frozen wastes of the other pole instead.

Peter I Island, where ‘there is nothing more to say’.

Judith Schalansky’s Atlas of Remote Islands: Fifty Island I have not visited and never will has to be one of the most delightful and beautiful things I have read in a long time. 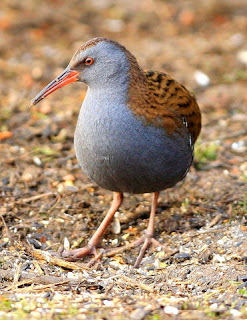 This (photo not taken by me) in honour of my first water rail, rallus aquaticus, spotted today in Watton, near Beverley.
Posted by puthwuth at 12.3.11 3 comments 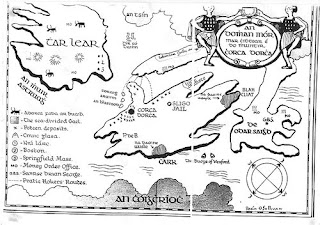 There is a business in Hull called Armadillo Self-Storage. I would have thought armadillos are already well stored inside that casing of theirs, but no, and what a nuisance they are, filing along Drypool and Witham on their way to a lock-in garage behind a gym and a takeaway. There is a Unicorn Trading Park further out the same road: insert zoological riff of your own inventing here, since one at a time is as much as I can manage. Trading outlets do have odd names though. Carpet Madness, for instance. I was there last weekend and am still reeling from the symptoms, which are endemic to the place (hence the name). I’m told pills can bring them under control, but some of the people I saw there quite patently weren’t taking their meds, let me tell you. Then there’s the Mattress King, still resisting all calls for an orderly transition to parliamentary democracy and switching the conversation to his appearance in Friends when the subject comes up. And Planet Wash, a foul science-fiction dystopian world peopled only by Polish men who want to sponge your car. Trust me, planet-wide economies cannot get buy on car-washing alone (I’ve tried). And then there’s Remnant Land on Hessle Road, ruled over by trussed-up bundles of carpet. The conversation is somewhat stilted after an hour or two, and that’s for sure.

But storage though, since I was talking about storage. Since I ran out of places to ran on my hand just the other Tuesday (whose telephone number is that?) I might as well use a blog post to store this hilarious Mylesian cutting, since I’m still ploughing my way through a lot of Myles at the moment. I turned it up in Carol Taaffe’s excellent Ireland Through the Looking Glass: Flann O’Brien, Myles na gCopaleen, and Irish Cultural Debate:

On 1 April 1946, Myles na gCopaleen presented his readers with an unusually convoluted story, even by his own standards. ‘Ran into myself down town the other evening’, he reported, ‘in rare form... and doesn’t look my age at all.’ He accompanies himself into a pub where he finds ‘your truly’ standing at the counter. They all decide to head out to Sandyford; the driver of the cab, of course, being none other than ‘the present writer’: ‘Begob is this what you’re at now says my excellency to him no says he quick as a flash me real job is above in the Park receiving diginitiries and dhriving around in the landjue I oney do this in me spare time.’ The Myleses, inseparable before ‘the Split’, grate on each other’s nerves, one lecturing the other on careering round town ‘acting the maggot as per usual’ [and, snip!]

Did I ever tell you about the worst job I ever had, by the way? It was removing armadillos from Keats and Chapman’s arses. No wait, here’s me bus. That map of yours is looking a bit crooked, by the way, you might want to get that seen to. Cheers now!
Posted by puthwuth at 12.3.11 0 comments 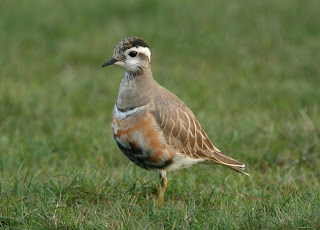 Around the time that Chapman was becoming disillusioned with his friend Keats’s flock of dotterels, acquired for seven and six from a man in the Dandelion Market and put out to roost in their back garden, the birds redeemed themselves by showing an unexpected talent as gentlemen’s outfitters. Picking up the large quantities of thread and fabric that Keats liked to keep lying around the place in the garden, God only knows why, the birds would get to work and several hours later would have produced a dazzling array of formal neckwear. The products of their labours, it must be said, were not in the best of taste. The colour schemes were gaudy and the patterns in the ‘novelty’ genre beloved of salesmen on their way to office Christmas parties and other such occasions. Yet the public went wild for their designs, especially a garish green number known as the ‘Happy Leprechaun’. Why, even Eamon de Valera was spotted wearing one. Sitting in their kitchen one day, our heroes discussed these changes in gentlemen’s fashions. ‘All is changed, changed dotterelly’, observed Keats. ‘A terrible bow-tie is born’, agreed Chapman.
Posted by puthwuth at 10.3.11 0 comments