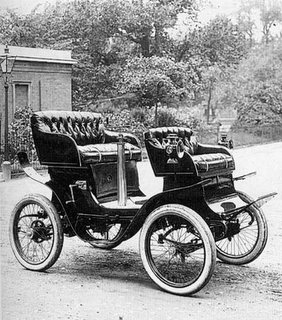 'Not a Pic-Pic, Gorman, not a Pic-Pic, a Dee Dyan Button.' So Mr Cream reminds Mr Gorman of the first car they saw in The Old Tune, Beckett's translation of Robert Pinget's La manivelle.

In Company, the narrator's father leaves his wife in labour to take a long walk. When he returns to find the labour 'still in swing' he takes refuge in his 'coachhouse' where he climbs into the driver's seat of his De Dion Bouton and waits for news that 'it was over at last.'

Which, if not the most hands-on example of spousal support, at least beats Goff Nixon in Watt, who leaves his wife to crawl upstairs in labour and sever the umbilical cord with her teeth while he plays slosh in the billiards room.

As I mentioned, The Old Tune is a translation from Pinget; in return Pinget translated All That Fall and Embers as Tous ceux qui tombent and Cendres. Perhaps it's just Anglophone allergic reactions to the nouveau roman, but the amount of Pinget novels available in translation is fairly meagre. John Calder lists three in print: Bagu, Mahu or the Material, and The Inquisitory. Someone should do some more.

Pinget was also involved in Beckett's first venture into the theatre directing that became so important to him in the 70s and 80s, when Pierre Chabert persuaded him to direct Pinget's L'Hypothèse in 1964.
Posted by puthwuth at 28.1.06