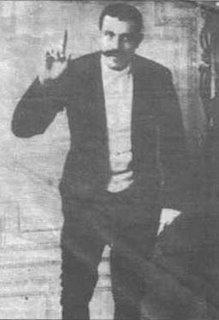 Dressed in a red coat and silk collar, black satin breeches with matching stockings and patent leather pumps, he played the flute through his backside, did imitations of farmyard animals, of a 'bride on her wedding night' (a shy squeak) with a morning-after sequel (a hearty roar), and even one of the 1906 San Francisco earthquake. King Leopold II of Belgium once travelled incognito to watch him perform and tipped him 20 francs.

Here's what Molloy says about farting:

I can't help it, gas escapes from my fundament on the least pretext, it's hard not to mention it now and then, however my great distaste. One day I counted them. Three hundred and fifteen farts in nineteen hours, or an average of over sixteen farts an hour. After all it's not excessive. Four farts every fifteen minutes. It's nothing. Not even one fart every four minutes. It's unbelievable. Damn it, I hardly fart at all...

And finally, the poem Beckett wrote on the death of his father, 'Malacoda', is named after the devil who farts at Dante and Virgil in canto XXI of the Inferno: 'ed elli avea del cul fatto trombetta.'