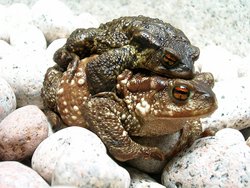 It's nae good, I cannae hold her anymore! The Danish Star Trek toad vainly attempts to squeeze the air out of a soon-to-be suicide toad


Analysts predict 2006 could be a crunch, or even splat year for the worrying phenomenon of toad extremism.

Immigrant German toads, plucked from their native ponds and forced to chew German worms for little or no pay, often speaking little or no German toadish, have formed crack battalions of extremist suicide toads.

One explanation offered for their behaviour is the practice among immigrant toads of reading toad scripture, such as the poetry of Philip Larkin, backwards. According to urban myth, when read backwards his poem 'Toads' contains the message 'You big ugly fecker, I bet your intestines wouldn't even spray six inches if you exploded them across the pond.'