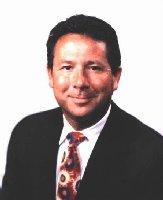 My schizophrenic aversion to pictures of the author Louis Wolfson means this is a picture of some other Louis Wolfson instead, and a 'solo platinum producer award' winner too, which is either something to do with very advanced DIY metallurgy or the music industry, I'm not sure which

Louis Wolfson (b. 1931) is a New York-born Jewish writer, and author of Le schizo et les langues. For reasons best known to himself, he could not (still can't?) bear the experience of hearing or reading English, and performed ingenious verbal fugues, translating the English all around him into a Finnegans Wake-style soup of more reassuring tongues. Lacanians must have a field day with him. In The Violence of Language, Jean-Jacques Lecercle describes the process:

Like Brisset [see my earlier post], Wolfson does violence to the sentences he compulsively analyses, and sometimes re-analyses. But there is an important difference. He respects the words of the original text, he does not cut them up into syllables. Rather, he ‘translates’ them, using homophony between languages and not just within a language, and combines these translations into sentences that, being written in several languages, are linguistic monsters. Thus, when he hears some workmen saying about him ‘he’s a screwball’—we can understand the urgent necessity of defusing the aggressive potential of the sentence through translation—he produces the following sentence: H(o)(u) i(l) (est ist yest) (un ein odin schab) (écrou Schraube) (Ball balle),where we recognize words in French, German, Hebrew, and Russian, and where I have placed variants he gives between [parentheses], because any variation will do, providing it is not an English word.

Is Wolfson still alive? Is he still writing? How is his tolerance for English these days?
Posted by puthwuth at 22.1.06

I would be interested if you find out anything about him. I have both of his books.

He's still alive, still doesn't like english. During 2011 last months he suffered an appoplegy and I was in charge of all his needs. Actually, I think, i'm the only person he trust.

there is an radioaudition about him on france culture, if U know french see at their page audition from 14.05.12 from 12pm.