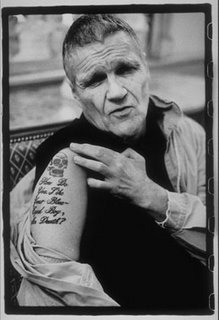 The one on my other arm is for armadillo stew

This man knows lots of good possum recipes. It's novelist Harry Crews, as featured on Jim White's road movie jaunt through the deep South, Searching for the Wrong-Eyed Jesus.

Looking up some possum recipes myself I noticed one specified that the beast be 'good and dead -- really dead', which is always a help.

Also, when burying a possum, Harry said (if you're already full and don't fancy eating it), make sure you put it in the hole face down. That way when its ghost wakes up it'll dig down rather than up and go looking for vengeance offa some Chinaman instead of you.

Other highlights of the film included a 40 by 10 foot fresco of the rapture on the wall of the Jesus is Lord Cafe, Catfish Restaurant and Truck Stop, the Handsome Family playing 'My Sister's Tiny Hands' on the porch of a shack in the middle of an alligator-infested bayou lake, and Melissa Swingle (i.e. half the Handsome Family) perched on the boot of Jim White's Chevy playing 'Amazing Grace' on the saw.

Sam: He saw his reflection in the water, thought it was him and drowned trying to save himself.
Chris: That's why my mom doesn't let me look in the toilet.