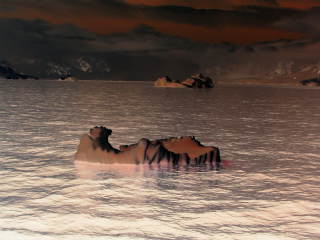 Hindered from birth by a cruel parental decision to name him after the latest Austin Riley 'automated vehicle', Apsley Cherry-Garrard sat and sulked over tea and scones one morning and vowed: By jingo I know what I'll do! I'll sail to Antarctica and brave the scrotum-shrivelling cold in search of an emperor penguin egg! That'll show beastly mumsy and daddy!

And so he did, as recounted in his book The Worst Journey in the World. In almost total darkness and temperatures of -40oC to -70oC Cherry-Garrard, Bill Wilson and Henry "Birdie" Bowers manhauled their sledge 60 miles from Scott's base at Cape Evans to the far side of Ross Island. Reaching Cape Crozier they harvested the penguin eggs and dropped in for tea and scones with the Bishop of Antarctica only to find themselves pinned down shortly afterwards by an almighty storm. Their tent blew away, condemning the three men to almost certain death. There they lay in their sleeping bags, singing hymns, swapping stories about their all-time favourite Daily Telegraph crosswords and waiting to die. But then the wind died down and they found their tent just yards away. What silly buggers we are, said Henry "Birdie" Bowers and sang another hymn. Then back they toddled to Cape Evans, sleeping upright and even sleepwalking in their sledge traces as they went. What a lark! And off they sailed to England so Cherry-Garrard could hand over the eggs. In he went to the British Museum and said, Guess what? I've got some emperor penguin eggs for you. And they said, oh really? That's nice. The curator didn't even bother saying thanks, and just stuck the things in a drawer and forgot all about them, and Cherry-Garrard felt a teensy-weensy bit sad and disappointed, and none of this would have happened if only his parents could have given a sensible name like Keith or Trevor. But on the plus side he did get to meet lots of penguins, which is always fun. Hurrah for Apsley Cherry-Garrard!
Posted by puthwuth at 11.1.06