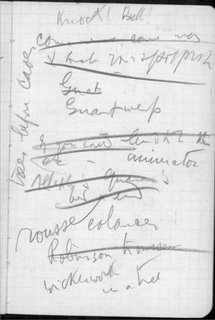 'You complain that this stuff is not written in English. It is not written at all. It not to be read -- or rather it is not only to be read. It is to be looked at and listened to. His writing is not about something; it is that something itself.'

Thus Beckett of Work in Progress in 1929. Richard Ellmann tells the story of Joyce dictating Finnegans Wake to Beckett and shouting 'Come in' when someone knocks on the door; when Beckett reads it back to him the 'Come in' is in the text and the surprised Joyce decides to keep it there. A charming story but for the fact that no one has ever found it since.

Definitely in the text though is 'Sordid Sam' (FW 40), 'a dour decent deblancer, the unwashed, haunted always by his ham'.

And also what might be a description of the hiding-in-the-tree incident that turns up in Company: 'You is feeling like you was lost in the bush, boy? You says: It is a puling sample jungle of woods. You most shouts out: Bethicket me for a stump of beech if I have the poultriest notions what the farest he all means' (FW 112).

And also the high jinks of 'Slippery Sam' and 'Tomtinker Tim' (FW 340-1), who may be Thomas MacGreevy.

And finally this: 'Illstarred punster, lipstering cowknucks. 'Twas the quadra sent him and Trinity too. And he can cantab as chipper as any oxon ever I mood with, a tiptoe singer! He'll prisckly soon hand tune your Erin's ear for you' (FW 467).

Probably the best place to find that mythical knock is the 1982 play Ohio Impromptu. The long black coat, Latin Quarter hat and reference to the Isle of Swans can't help suggesting images of Joyce in turn-on-the-century Paris: