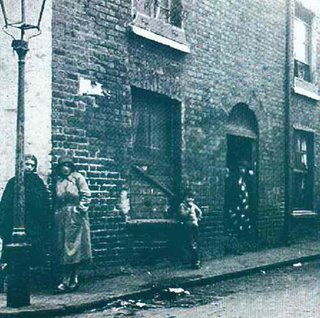 In Waiting for Godot Estragon begins to tell a joke about an Englishman in a brothel, but fails to reach the punchline. So here it is now. The Englishman goes into the brothel and the bawd asks him if he wants a blonde, a brunette or a redhead. I'll have a boy, says the Englishman. That's it, I'm calling a policeman! says the bawd. Don't bother, says the Englishman, they're far too gritty.

In a letter to Thomas MacGreevy the young Beckett describes being thrown out of a Dublin brothel for sniggering at a print on the wall of Dante's first encounter with Beatrice.

The above image comes from Terry Fagan's Monto -- Madams, Murder and Black Coddle, a book from which I learn that famous madam Becky Cooper (she puts in a scary appearance in the poem Sanies II) owned a talking parrot. Could this be the same parrot we meet at Helen's place in Mercier and Camier? I suspect so.

Speaking of parrots, I always thought that if I had one I'd have to call him Kane, so he could be 'Psittacine Kane'.

Sorry, how many facts was that?

I came up with this same pun, independently, but I was not first- I credited you on my Blog