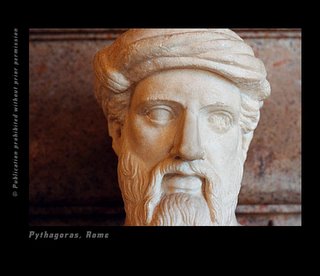 'peekaboo here I come again, just when most needed, like the square root of minus one' (Texts for Nothing)

Yeats calls Pythagoras 'golden-thighed'. He was also known to abominate beans. But not quite as much as he abominated irrational numbers. A 'surd' in English comes via the Latin translation, surdus, of the Greek alogos, an irrational number or 'deaf root'. One such would be the hypotenuse of a triangle whose other two sides are a metre long, i.e the square root of two. Pythagoras disliked these so much because of their standing rebuke to his vision of mathematical order and clarity. The worst offender was the number invoked in a Duthuit dialogue as symptomatic of painting's history of 'Pythagorean terror', 'as though the irrationality of pi were an offence against the deity.'

The Pythagorean disciple who broke the news to a salivating public of the incommensurability of side and diagonal was Hippasos the akousmatic, for which crime the master had him drowned. 'So perish all babblers', comments Wylie in Murphy. And as Beckett writes around the same time in the French essay Les deux besoins: