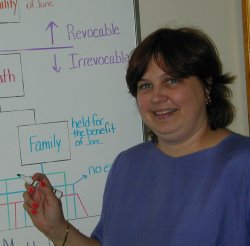 Suzann Beckett, a lawyer in Hartford, Connecticut. One letter away from still not being married to Samuel Beckett.

1) Le Kid. A 1931 revue parody of Corneille's Le Cid. No known text.
2) The manuscript of Murphy, apparently titled Sasha Murphy. In private hands and never seen or studied.
3) The 1936-7 German diary. Access to an unknown German diary was one of the aces in Knowlson's pack as a biographer, but all we have are extracts in Damned to Fame.
4) The Petit sot poems. In her memoir How It Was Anne Atik describes Beckett disparaging these (or one of them anyway) as his first clumsy attempt to write in French. The reason why they weren't in the Calder Poems 1930-1989, by the way, is that some people believe they aren't by Beckett at all, but his wife Suzanne.
5) F–. This is a Beckett text all right, a Suzanne Beckett text, translated by Samuel and published in Transition in 1949. Except that, in a neat symmetry with the last example, some people think that he-Beckett wrote the original too.
6) Ernest and Alice. An abandoned Endgame-era play whose Hamm figure is confined not to a wheelchair but a cross, with Alice ministering to him. In Reading University Library's Beckett archive.
7) The Way. A short late prose text inexplicably omitted from Gontarski's Complete Short Prose. Available in an eccentric little book by Friedhelm Rathjen called Samuel Beckett und Seine Fahrräder.
8) 'Echo's Bones'. Not the poetry collection, but a late addition to More Pricks Than Kicks in which Belacqua comes back from the dead and has a run-in with Lord Gall of Wormwood and his sidekick Zavorovna Privet. Unpublished.
9) J.M. Mime. An indecipherable but very mathematical-looking mime reproduced at the end of Gontarski's study The Intent of Undoing.
10) 'PSS'. A late poem not in the Calder Poems 1930-1989, but available in an excellent Spanish edition of Beckett's poems, Obra poética completa.
Posted by puthwuth at 16.1.06