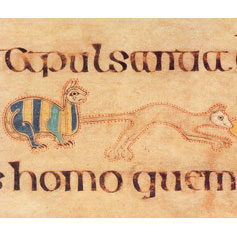 A cat, blue, yellow and green as was the style of the time, chasing a rat with a communion wafer in its mouth (Book of Kells)

In Watt Dum Spiro, editor of the popular Catholic monthly Crux, reads a letter aloud from Martin Ignatius MacKenzie addressing the problem of host-ingestion by rodents:

Sir,
A rat, or other small animal, eats of a consecrated wafter.
1. Does he ingest the Real Body, or does he not?
2. If he does not, what has become of it?
3. If he does, what is to be done with him?

And there the matter rests, or appears to. Except that in the drafts of the novel, a theology student by the name of Matthew McGilligan pronounces that ‘the rat, when caught, should be pursued with all the vigour of the Canon Laws and pontifical decrees.’ If his pursuers fail to catch ‘d’ould rat unthil afther what he’s bane an […] done his doolies’, there will be no alternative but to (gulp) – but at this point, much Arthur’s tale later on in the book, the narrative is unceremonially interrupted.

Remembering his time with Watt in part three of the book, ‘Sam’ declares: ‘Our particular friends were the rats, that dwelt by the stream. They were long and black […] And then we would sit down in the midst of them, and give them to eat, out of our hands, of a nice fat frog, or a baby thrush. Or seizing suddenly a plump young rat, resting in our bosom after its repast, we would feed it to its mother, or its father, or its brother, or its sister, or to some less fortunate relative. It was on these occasions, we agreed, after an exchange of views, that we came nearest to God.’

With thanks to Mary Bryden’s Samuel Beckett and the Idea of God. The photograph on the cover of which, by the way, is of the fork in the road at the top of the valley in Glencree.
Posted by puthwuth at 22.1.06