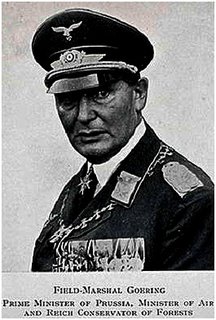 Now where did I leave my bicycle clips? Poland? Ach so!

I ask you, does this man look like he's in need of a bicycle? A thousand-year Reich and the extermination of the inferior races perhaps, but a bicycle no. Yet when Moran chastises his absent-minded son in Molloy, he asks 'Who is this bicycle for, I said, Goering?'

Well, obviously not. Nevertheless, his presence in the text is not merely absurd. In Krapp's Last Tape Krapp mentions the singing of Miss McGlome ('Wonderful woman though. Connaught, I fancy'). Speaking to Deirdre Bair, Beckett described how Miss McGlome had begun life as Miss Beamish, based on a colourful figure he encountered in Roussillon who 'professed to being a novelist' and 'loudly claimed to everyone that she was a first cousin of Winston Churchill.' On the contrary, Annie O'Meare de Vic Beamish, for such was her name, was a relation by marriage not of Churchill but of the German gentleman pictured above.

These facts I learn from W.J. McCormack's From Burke to Beckett: Ascendancy, Tradition and Betrayal in Literary History. 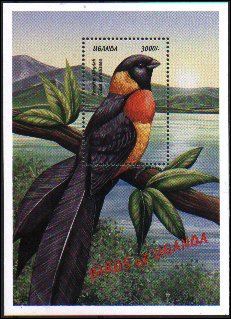 And still on Krapp's Last Tape, here's a vidua bird, that fabled beast, on a Ugandan stamp.

Mister,
You got a great Beckett blog here. I enjoyed reading it very much.
Thanks
Federico