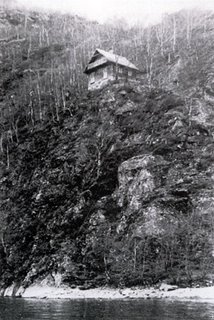 There are many reasons why sometime remote-part-of-Norway-inhabitant (see above) Ludwig Wittgenstein is so great, but here is one. He wrote the book we know in English (or Latin, rather) as the Tractaus Logico-Philosophicus while serving as a private during the First World War. The book wasn’t published until 1921, but on his release from a POW camp in 1918 he gave away the fortune he had inherited and trained as a primary school teacher, for the simple reason that, having written the book, all the problems of philosophy were now solved. He worked as a teacher until 1926, when he resigned and took up a job as a monastery gardener instead, and eventually returned to Cambridge in 1929, beginning the period that led to the Philosophical Investigations. But what makes all this so great is that having just proved himself, what does he do? He stops. He stops because he has just proved himself. There is no reason to go on. He says: did you like my book? Then go back and read it again. There is nothing more to say. I can give up now.

PS The fact that he decided he was wrong and went back to Cambridge to write that other book is also great.
Posted by puthwuth at 2.1.06