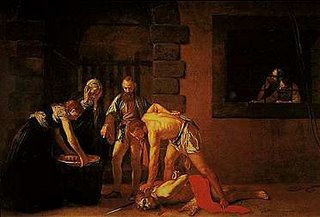 We know from James Knowlson and Eoin O'Brien how much time Beckett spent in the National Gallery in Dublin. If the painting that turned up in a Jesuit house on Pembroke Street in 1990 could have been found and donated to the gallery a bit earlier, maybe we wouldn't have had to wait all those decades for a Beckett play inspired by a Caravaggio (it had been with the Jesuits since the 1930s, back in the days when Beckett's Descartes was ejecting members of that order from the skylight in Whoroscope). As it is he saw 'The Decollation of St. John' in Valletta Cathedral on holiday in Malta in 1971 and wrote Not I shortly afterwards. Not I was obviously Beckett's 'what I did on my holidays' play: the figure of the hooded Auditor was inspired by the sight of djellaba-clad women on another holiday, in Morocco.
Posted by puthwuth at 2.1.06