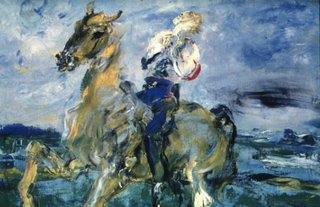 Ten horses or other vaguely equine quadrupeds in Beckett.

1) 'Can hinnies procreate?' asks Maddy Rooney in All That Fall. A hinny is the offspring of a horse and a female donkey (or jennet), and is almost always sterile. Mrs Rooney hoped her 'mind doctor' could help her with her 'lifelong preoccupation with horses' buttocks'.
2) The French eat horses, you know. Because, still with Mrs Rooney, she tells Mr Tyler (or soliloquizes in his presence) of wanting 'fifty years of twice-daily love, like a Paris horse-butcher's regular'. The narrator of The Calmative finds himself outside a horse butcher's, and in The Unnamable there's a statue to the 'hippophagist Ducroix'. Beckett's 30s nemesis Austin Clarke wrote a long and humane poem called 'The Hippophagists', providing yet another strange point of connection between the two men (here's another: in the 30s Beckett was notably fond of the word 'stercoraceous', describing Clarke to Thomas MacGreevy as one of the 'stercoraceous bastards' who made it impossible for him to drink in Dublin city-centre pubs, driving him out to Phibsborough instead; and in Clarke's Mnemosyne Lay in Dust we find the word 'stercorians'. What's all that about? (Possibly nothing.)
3) The white horse, 'what I believe the Germans call a Schimmel', in From an Abandoned Work.
4) The jennet that throws and cripples Lucy in 'Walking Out', blissfully releasing Belacqua from any further conjugal duties.
5) Not a horse but a horse owner: Boss Croker, whose Croker's Acres feature again in 'Walking Out', Company and Not I. His house later became the residence of the British ambassador to Ireland.
6) A print of Boss Croker's horse Joss, contemplated by Watt.
7) The two horses or deux chevaux of Beckett's Citroën 2CV, bought in 1963 and driven, to his passengers' frequent great alarm, until his death. Here's a small ad for the selfsame car, complete with original papers in Beckett's name. Am I skimping on the horses proper here?
8) The cabman's long-suffering horse in The Expelled.
9) Big Lambert's long-suffering mule in Malone Dies, snapped up at the knacker's yard for two further years of knackering toil before 'the face of the earth, on which it had plodded its life away, would see it no more.'
10) And finally, the narrator of Text for Nothing 3 is partial to a flurry or two: 'The sport of kings is our passion... Nothing human is foreign to us, once we have digested the racing news.' As long as he studies the form a bit knowledgeably than Watt. Eoin O'Brien asserts that Watt is mistaken in 'Joss', which is in fact another quadruped altogether, the Derby-winning Orby. But that's as maybe.
Posted by puthwuth at 11.1.07

Nice to see JB Yeats's 'Singing Horseman' crop up on your blog. I love that painting. Anthony Glavin did too; he had a large reproduction of it on the wall beside his bed for as long as I can remember.