Some Men Are Islands 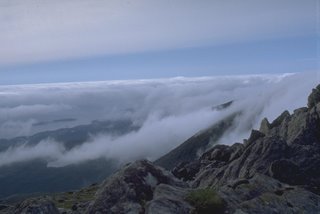 According to the 2001 UK census, the Scottish isles of South Rona, Eilean Donnan, Shuna and Sanda each have a population of one.

North Rona (which is nowhere near South Rona) is even more remote than St Kilda, but was inhabited continuously until 1844. According to a seventeenth-century Gaelic travel writer, the islanders "took their surnames from the colours of the sky, rainbow and clouds." Here's an account of going to visit it by Kathleen Jamie.
Posted by puthwuth at 19.1.07