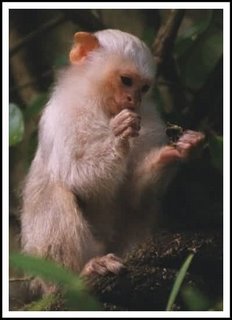 1) The Unnamable compares himself to a 'wounded wistiti'. A wistiti is a marmoset. The narrator of From an Abandoned Work compares his voice to 'a marmoset sitting on my shoulder with its bushy tail, keeping me company.'
2) In the absence of a human companion ('failing kindred meat') the narrator of How It Is imagines 'a llama emergency dream an alpaca llama'.
3) Also to be found in How It Is is a humming-bird: 'I watch it fly lightning semicircle deasil then respite then the next.'
4) In the clotted early poem 'Text' we find a hippopotamus, or rather a 'hippopot' with a 'cedar tail', with a 'non-suppliant airtight alligator' in close pursuit.
5) In another early poem, 'Return to the Vestry', an innocent pigeon comes in for some manhandling: 'Pluck that pigeon she dribbles fertility.'
6) A goldfish briefly gets to see O's face in Film, before being covered with a coat. Not to mention a dog, cat and parrot. Parrots are everywhere in Beckett. But enough about parrots, for now.
7) The animator in Rough for Radio II snivels enthusiastically of 'fodient rodents'.
8) The lobster in More Pricks Than Kicks is fairly well-known, but there's another one skulking in The Unnamable: 'it's human, a lobster couldn't do it', he says. Nerval had a pet lobster, which he used to bring for walks on a blue ribbon.
9) 'Back to Teneriffe and the apes?' Murphy asks Neary, in a reference to Köhler's Mentality of Apes. Happy Days in the Beckett on Film project was shot in a sadly apeless Teneriffe.
10) Sapo's name, in Malone Dies, means 'toadfish'. Does that count?
Posted by puthwuth at 4.1.07