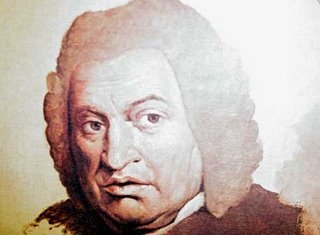 Stop me if you've heard this one before. The linguist in the lecture theatre says that in some languages a double negative intensifies the negative (No tengo nada) but in no language does a double positive add up to a negative, to which a voice from the back of the hall retorts 'yeah yeah'.

I mentioned before about Dr Johnson's habit, reported by Boswell, of introducing statements of agreement with the word 'No', making it a contradictory affirmative like the German 'Doch' Beckett uses in 'Enueg II' ('Doch doch I assure thee'). Contradictory affirmative might just cover Beckett's description of Johnson as one who had a vision of 'positive annihilation'. That was in 1937, at the height of his 'Johnson fantasy', which produced the dramatic fragment Human Wishes but also three notebooks of Johnsoniana. In them we learn of:

The 'critical period' for Johnson, '1764-6', one of profound gloom. His obsessive compulsive tics, groaning, muttering, pacing back and forth: 'At such times he received any polite or pertinent remark with a discouraging silence or with a bout of stupefying rudeness.'

His mother calling him a 'puppy', which Johnson answered by asking if she knew the name for a puppy's mother.

His love of arithmetic.

His fear of spirits and belief he had heard his dead mother crying out 'Sam!' to him.

His purchase of oysters for his cat Hodge. Johnson bought the oysters himself so as not to antagonize his servants.

His fear of hell. As he told Adams, 'I am afraid I may be one of those who shall be damned.' 'What do you mean by damned?' asked Adams, rashly. 'Sent to hell, sir, and punished everlastingly.'

His deathbed request to Reynolds never to paint on a Sunday.

His pilgrimage to Uttoxter, near Lichfield, fifty years exactly after his father had asked him to take his place at his bookstall for the day. Johnson refused. And so, fifty years later, he returned to where the stall had been, stood bareheaded 'exposed to the sneers of the passers-by by the inclemency of the weather' and begged heaven for forgiveness.

The mystery of the orange peel, as described in Boswell, later taken up by Dupin, Holmes and Maigret, but sadly unsolved, to this day.

His passion for being bled.

A possible origin of Vladimir's injunction to Estragon not to describe his dreams ('DON'T TELL ME!'). Johnson urged Mrs Thrale to make her ten-year old son confess his dreams since for his part 'the first corruption that enteremy heart was communicated in a dream'. When she inquired what it was, 'Do not ask me' he howled 'with much violence' and stomped off. Beckett's source for this appears to have been Mrs Piozzi's Anecdotes of Dr Johnson.

In a different source entirely, a notebook for the mirlitonnades, we find one last snippet of Johnsoniana: a pessary, you may be glad to know, courtesy of the great lexicographer, is 'an oblong form of medicine, made to thrust up into the uterus upon some extraordinary occasion.'
Posted by puthwuth at 31.1.07

A possible origin of Vladimir's injunction to Estragon not to describe his dreams ('DON'T TELL ME!').

Came across this related sentiment in Molloy the other day:

One night, having finally succeeded in falling asleep beside my son as usual, I woke with a start, feeling as if I had just been dealt a violent blow. It's all right, I am not going to tell you a dream properly so called. (Grove, 1958, p. 187)