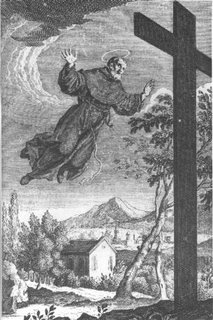 What a great saint Joseph of Cupertino is. He was a remarkably slow learner and could scarcely read or write. When taken with religious ecstasy he would float off to the ceiling or into the sky and have to be ordered down; this occurred most embarrassingly during an audience with Pope Urban VIII. His fellow friars disliked him for failing to take money for his cures, and he was investigated by the Inquisition. Today he is the patron saint of pilots, airline travellers, and bad students.
Posted by puthwuth at 11.1.07