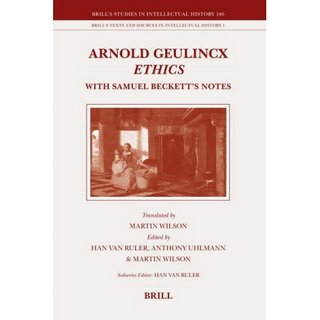 Braving librarian's lung and with nothing to sustain me beyond self-adminstered Leaving Cert Latin, I once tried to plough my way through the selfsame three-volume edition of Arnold Geulincx's Ethica that Beckett had studied in the Early Printed Books room of Trinity College, Dublin library.

The operation was not a great success, though I persisted long enough to stumble upon the celebrated Ubi nihil vales ibi nihil velis, as savoured by Murphy and subsequently recommended by Beckett to scholars as the ideal point of entry into his work.

A tutor called Ward makes the protagonist a gift of the same book in The End.

Molloy invokes Geulincx to decry the illusion of free will.

And though he doesn't name him, the Unnamable's example of galleyman bound for the pillars of Hercules crawling towards the sun would seem to derive from Geulincx's declaration that we are indeed free, free as a man on a westbound ship is to crawl east along the deck.

I could embark on a discussion of Occasionalism, but since the first-ever translation of the Ethica out of its 'beautiful Belgo-Latin' has just been published (see picture), I consider myself excused that particular pensum. The passages on despectio sui come highly recommended.

It comes complete with Beckett's notes too, I should add.

Arnold Geulincx. Pronounced 'Hyoolinks'. I asked a Belgian person about it once.
Posted by puthwuth at 22.1.07