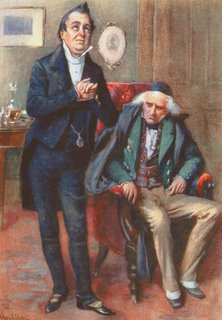 One of the most delicious temptations of being an Irish critic or commentator who feels the world doesn't pay you enough attention is a good old bout of holier-than-thou Pecksniffery.

It's a real pleasure to find the following random examples on something called 'The Kiosque', on the (Irish) Western Writers' Centre website:

‘Le matricule des anges’ new number stirs the conscience as well as the imagination by reminding us in its editorial of the homeless and hopeless of Europe’s most ‘romantic’ city – when will an Irish literary journal ever concern itself with editorialising on the socially dark side?

Writers in France are social participants in a way that writers here are not... Inconceivable, let us say again here in Ireland, that any of our poetry or literary mags would adopt a socio-political stance.

Like more than one European journal, Axolotl mingles poetry and politics: no similar journal does so anywhere in Ireland.

It is worth pondering why Irish literary mags avoid politics and engagement like the plague, whereas our continental brothers see no division at all between art and politics and are willing to argue about it in print.