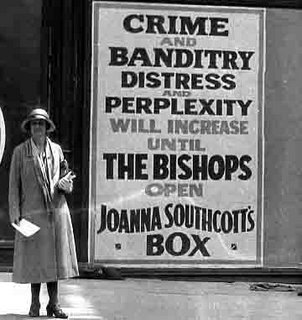 As religious slogans go, ‘War, disease, crime and banditry will increase until the Bishops open Joanna Southcott's box’ sounds pretty catchy to me.

Joanna Southcott (1750-1814) was a prophetess who spent her time ‘sealing’ the 144,000 elect (for a small cash consideration), and predicted shortly before her death that she would give birth to the Messiah. He appears to have defaulted on this commitment, unless Southcott took against him and sealed him into the large box of prophecies she left behind. This was not to be opened except in the presence of the twenty-four bishops of the Church of England. The bishops have proved unwilling to oblige, offering excuses ranging from ‘I’m starching my collar that night’ to ‘I’m allergic to woodworm.’ 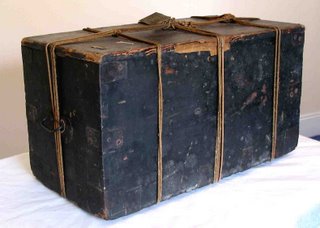 Interest in Joanna’s box has ebbed and flowed. Present-day custodians of the box, the Panacea society, describe one wave of enthusiasm around the time of the First World War:

Articles began to appear in the national press about the Box, causing many older Southcottian families to be a little nervous about both the publicity and the zeal of new converts. A campaign to get the bishops to open the Box was initiated, and its fame as a national and public phenomenon began.

In its early manifestation, the awareness campaign even managed to reach the eyes and ears of King George V, through the efforts of Princess Louise, his aunt, and Lady Paget, both of whom were encouraged by the determination of Mrs Fox and her cousin Lady Portsmouth. As World War 1 drew to a close in the autumn of 1918, these four ladies realised that England’s fate was sealed in the prophecies placed in the Box over a century ago. Surely it was now only a matter of time before 24 bishops consented to its opening? 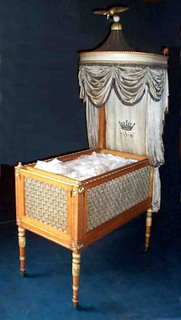 There is a cot too, the cot in which Southcott went into divine labour before 'the ethereal invisible body was taken by angels back to the Throne of God until the time would come for Shiloh's destiny to be fulfilled.' The box has been opened of course though, once, when it started buzzing and Southcott realized she'd left her handbag and mobile phone inside it.

The exquisite agonies or return and the emptiness and disillusionments awaiting us when we do.

When I was young I was told that a Victorian gentleman who had bid goodbye never went back his hat or umbrella when he forgot them, but always had them sent on.

Which reminds me of the scene in my favourite television programme Shameless last night, when the fluttering agoraphobic Sheila walked out on Frank. Having been forced to choose between her and his recently reappeared ex-wife, he chose Sheila. They danced with joy. He loved her so much, he said, he'd get divorced from Monica the minute they returned from holiday, thus belatedly letting Sheila know he'd never divorced Monica in the first place and was in fact a bigamist. Sheila drove off in the taxi, abandoning him. The taxi stopped and reversed. Sheila ran out, opened the door, re-emerged with a black sack which she placed in the wheelie bin, then got back into the taxi and drove away without a word. 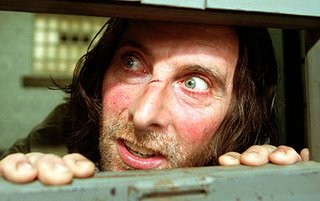 The campaign to open Joanna's box starts here.
Posted by puthwuth at 18.1.07