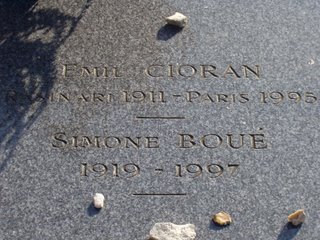 Fox have yet to commission a show called When European Intellectuals of the Inter-War Years Go Wild, but when they do Cioran will have to take his place in the queue alongside De Man, Heidegger, Céline, Brasillach, Francis Stuart and all the rest of that sorry galère of far-right fellow-travellers. Because Cioran did go wild, very wild indeed. Marta Petreu’s An Infamous Past: E.M. Cioran and the Rise of Fascism in Romania performs a full forensic shakedown of the evidence. For those yet to take a live interest in Ruritanian fascism de l’entre-guerre, the following pointers may be of use.

Alongside Mircea Eliade, Eugen Ionesco and Mihail Sebastian, but not the comedy Romanian of Beckett’s Eleutheria, Mr Verolesco, the young Cioran was part of the so-called Generation of ’27. In the early 30s politics began to colour Cioran’s work, as they did that of his contemporaries too (Eliade too has his far-right links, but that’s another story). Studies in Germany between 1933 and 1935 gave him a sense of shame at his Romanianness, and all its attendant poverty, provincialism and backwardness. It also encouraged him to take it out on handy targets such as the decadence of liberal democracy, which he proposed to replace with the infinitely more attractive ‘dictatorial regime’ he saw around him in Hitler’s Germany. Writing for the Romanian magazine Vremea from Munich, he praised the Night of the Long Knives (‘what has humanity lost if the lives of a few imbeciles were taken’), became a supporter of Codreanu’s Legion of the Archangel Michael, otherwise the Iron Guard, and hatched the political vision he pours into his 1936 book The Transformation of Romania. In 1941 he accepted the post of cultural adviser in France to the post-Legionary Romanian quisling administration under enthusiastic fascist Ion Antonescu. He lasted three and a half months.

In 1944 his Jewish Romanian expatriate friend Benjamin Fondane was deported on the next-to-last convoy to Auschwitz, where he died. This prompted something of a reconsideration, it seems. In 1946 he wrote to his parents ‘I think I shall never again embrace another ideology’. He foreswore Romania and its language and concentrated his racial bile in print on his homeland’s ‘timeless peasants enamoured of their own torpor and almost bursting with hebetude’, its ‘people of losers’ and ‘barbarian scum’. 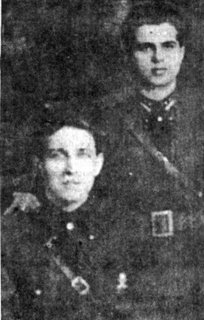 The Transformation of Romania was reprinted in 1990, but without the original fourth chapter on the Jews, and without its anti-Hungarians passages too. To give some idea of just how rancid the culture of Romanian Anti-Semitism was, and Cioran’s contribution to it, here courtesy of Petreu are some examples from the suppressed chapter:

The Romanian democratic regime has worked only to protect the Jews and Jewish-Romanian capital.

If we were to give absolute freedom to the Jews, I firmly believe they would change even the name of the country in less than a year.

The Jew is not our fellow man, our kind, and no matter how close we become, the chasm is still there, whether we like it or not. It is as if they were descended from a different breed of monkey than ourselves, condemned to a sterile tragedy, to hopes that always turn out to be false. It is at a human level that we cannot get close to them, for a Jew is first Jewish, and only then human.

Any doubts over what this meant in practice are dispelled by a quick browse of Raul Hilberg's The Destruction of the European Jews, which depicts the unusual spectacle of embarrassed Nazis stepping in to restrain Iron Guard-inspired anti-Semitism. Unlike the Germans with their penchant for deportations and concentration camps, the Romanians didn't see why the Jews shouldn't just be suspended from the nearest meathook.

Cioran is one of my favourite authors. What am I meant to do with passages like those above? To be strictly fair about his post-war position, he never denied what he got up to as a young man, castigated himself repeatedly for his stupidity, returned to the subject nervously, obsessively in the still untranslated Cahiers, and never dressed up his repentance with Mel Gibsonesque auto-prosopagnosia about the darker places within him all this bile from spilt from; that at least he knew all too well. In fact, in many ways he remains recognisably the same writer he was then throughout the rest of the work: the Cahiers are full of philo-Semitic passages, but also numerous passages about how encombrant and attention-seeking they are, in ways that would fail any American university speech code of practice before you can say ‘Oy vey’.

Ripples of his Romanian past are everywhere in the Cahiers, as when he hears after several decades from a friend whose correspondence with Cioran had earned him a prison sentence back home of twenty-five years. Another expatriate writer living in Paris we can credit with an intimate understanding of Romanian fascism was Paul Celan. He translated the early Cioran book A Brief History of Decay into German.

The dying and senile Cioran, who also regressed to the language of his youth, would snatch at his nurses’ sleeves and protest to them ‘I am not an anti-Semite.’

But if he hadn't written The Transformation of Romania, might he never have written The Trouble with Being Born or Syllogisms of Bitterness either? I suspect so.

Would you place the tribute of a stone on his grave?
Posted by puthwuth at 28.1.07

You're a fucking pussy.

I'll take that as a no to my final question then.

Yes, I would for his sincere and honest way of dealing with himself,

of course I wouls and it would do me a great honour, to seempeople overwhelmedmwit his work,

O.K. but start doing it I am loosing patience!

Now, how can I correct all misspelled words?
Iulia

Iulia, do you mean mistakes of mine or yours?

These days (7,8,9)there was the XV colloquim on Cioran in Sibiu at the "Faculty of Arts and Letters" and in "Paltinis". (a resort nearby, where Cioran spend much time writing)I even was in his roon when I was a child.

do you happen to know which works of Beckett were influenced by the painitngs on the site. Do you know if Cioran was influenced by Beckett?

Cioran's essay on Beckett is in Exercises d'admiration, I think I'm right in saying. There are also quite a few references to him throughout the Cahiers.

I sure would. Great text!