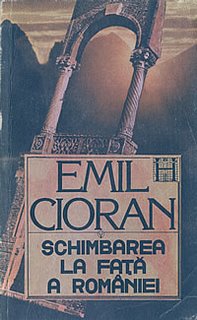 Someone appears to have put the full text of Cioran's The Transformation of Romania online. You can read it here, assuming you're on nodding terms with Romanian. It's the 1990 edition though, which I believe is heavily bowdlerized. Inject yourself with some liquid racism before you read it to make up for all the censored rants.

I'm told Romanian contains more Latin-derived words than Italian. It also has a pleasant panoply of little curlicue diacritics and a definite article that consists of sticking the suffix -ul onto nouns. Try reading the following out loud to any passing Eastern Europeans (maybe not a Hungarian) who look like they're in the mood for revolution:

No non-being. No absolute impossibility.
No alternative. No imperative. No irreparable.
Ease in facing life. No fear of death.