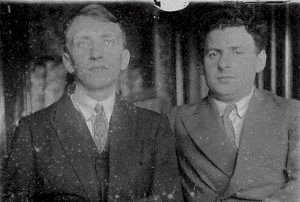 Another name I might have added to my roll-call of inter-war baddies is Maurice Blanchot. Just this morning I found a copy of Leslie Hill's Blanchot: Extreme Contemporary in the second-hand bookshop down the road. Details of what Blanchot did in the 30s have always been elusive (as have photographs of him, such as the one of him above with Emmanuel Levinas), but, briefly, he wrote for two far-right papers, Combat and L'insurgé (editing the first) that served up the usual French monarchist swill of Maurras and anti-Communism, with a sideorder of Jew-baiting when required, though apparently Blanchot couldn't get on with the odious anti-Semite in chief in literary circles, Robert Brasillach. An editorial he wrote for Combat called for right-wing 'terrorism' as a 'method of public salvation'.

Then under the Occupation he may or may not have changed his mind sufficiently to become active in the Resistance, ending up in front of (and miraculously escaping) the firing squad described in L'instant de ma mort.

Somehow though, as tales of infamy go, I prefer Cioran's. Blanchot yields to no one as a connoisseur of literary extremism and l'élan vers le pire, but there is something too fastidious and nail-paring about him. A hyena's laugh would make a good soundtrack for a Cioran book, whereas for Blanchot it would be... perhaps the owl of Minerva clearing its throat. Blanchot is Mallarmé, Cioran is Rimbaud.

Also, Blanchot doesn't have much of a sense of humour, or not the same kind at least. The hyena's laugh it is, for me.
Posted by puthwuth at 29.1.07

But Mallarme unlike Blanchot DID have a sense of humour, eh?

All right, I take it back. Though I don't think Mallarmean humour is exactly of the hyena-like kind I was describing. Also, his credentials as a youthful far-right terrorist are simply non-existent, AND he never ended up gun-running in, if not Abyssinia, then at least Belgium or Luxembourg.