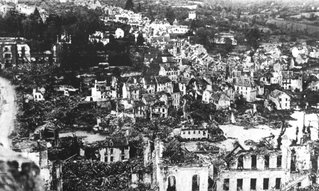 Seeing his hudibrastic pasquinade 'Antipepsis' in print was one of the few good things about Poems 1930-1989, but behind an endnote describing the poem as dated 'after St. Lo [Calder skimps on the circumflex] 1946' lurked a mystery.

The closing refrain 'Bring forth your dead! Bring forth your dead!' adds to the poem's air of a postwar reckoning with the 'time-honoured conception of humanity in ruins', and as such it features in Phyllis Gaffney's 1999 Irish University Review article on Beckett in Saint-Lô.

But the poem was not composed in 1946 at all and has nothing to do with the war. I know this because Edith Fournier told me as much. It's about the banning in Ireland in the 1930s of More Pricks Than Kicks, Beckett told her.

The revision of 'ass' to 'cart' makes no sense either. The cart has been placed before the ass because the censor cannot abide intelligence and sends it to the back of the queue. For the cart to be more intelligent inverts the inversion, but incoherently.

Why did Beckett made the typescript changes? Could someone else have made them, even, 'for reasons unknown'? I don't know. But 'Antipepsis' wasn't written in 1946.
Posted by puthwuth at 20.1.07