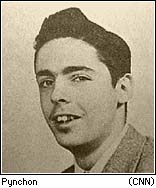 KFC prevented by law from calling itself 'Kentucky Fried Chicken'; delicious 100 per cent chicken-based product in fact from Alabama.

Asian man warned me about going to Bradford last week, described it as 'total dump'.

Very boring and quite possibly meaningless sounds have been encoded into the heavy metal records I've been listening to backwards lately.

Shape-changing brain-eating lizards are secretly running this country, and I for one think they're doing a bloody good job.

That's nothing. So does Mary ("In Harness") Harney!

That's nothing. So does Mary ("In Harness") Harney!