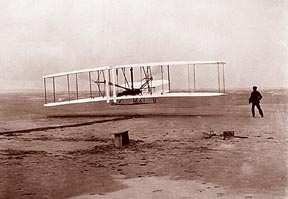 'Looking up at the blue sky and then at your mother's face you break the silence asking her if it is in reality much more distant than it appears [...] For some reason you could never fathom this question must have angered her exceedingly. For she shook off your little hand and made you a cutting retort you have never forgotten.' (Company)

'A small boy, stretching out his hands and looking up at the blue sky, asked his mother how such a thing was possible. Fuck off, she said.' (The End)

'The sky is further away than you think, is it not, mama? [...] She replied, to me her son, It is precisely as far away as it appears to be.' (Malone Dies)

And not forgetting the planes and flying angels of Beckett's translation of 'Zone':

Enoch Elijah Apollonius of Tyana hover
[...]
Host-elevating priests ascending endlessly
The aeroplane alights at last with outstretched pinions
Then the sky is filled with swallows in their millions

The infant Beckett's curiosity about the sky, if such it was, may have been an early foretaste of his desire to become a pilot, as expressed in a 1936 letter to Thomas MacGreevy: ‘I hope I am not too old to take it up seriously nor too stupid about machines to qualify as a commercial pilot. I do not feel like spending the rest of my life writing books that no one will read. It was not as though I wanted to write them.’

Which segues nicely into the story of Beckett taking his seat on an Air France flight just as a Captain Godot or Godeau welcomed passengers on board. Cue stiff drink. At least he'd turned up though.
Posted by puthwuth at 16.2.06