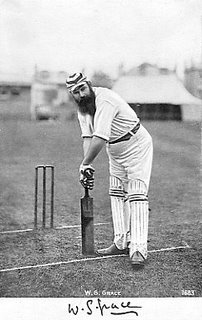 Despite cricket nut Harold Pinter’s Nobel Prize, Beckett remains the only Stockholm laureate to have found his way into the cricketer's bible Wisden. As a member of the Portora first eleven the schoolboy Beckett was praised as ‘an attractive batsman’, ‘a very good medium-pace bowler with a sharp break-back’ and ‘a brilliant field who brings off one-hand catches in fine style’. While at Trinity he notched up that Wisden appearance for matches against Northamptonshire, scoring 313 runs in his first season.

In later life Beckett liked taking in test games at Lords on visits to London.

And there the file on Beckett and cricket might have closed but for Roy Clements’ little pamphlet The Alternative Wisden on Samuel Barclay Beckett. Endgame has often been read as taking place in a post-apocalyptic wasteland, but Clements knows better: it is in fact a coded description of the 1937 test between England and South Africa, abandoned after rain delayed play for ten days. Hamm is English captain Walter Hammond, Nagg and Nell are the umpires, and Clov is the batting glove, or sub-collector of club members’ subscriptions (there’s a tortuous explanation for that one I won’t inflict on you here).

Estragon and Vladimir are a bowler and batsman, or perhaps two bowlers.

The Unnamable is Beckett’s no-ball.

And Happy Days is his anti-cricket play, featuring at its centre a symbol of a golfball on the tee.
Posted by puthwuth at 8.2.06