That They May Be Damned 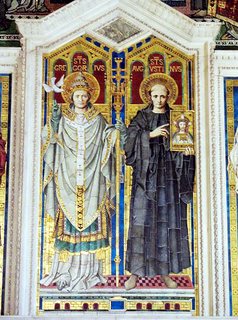 Ss Gregory and Augustine (who I always thought was black?!) admire the 'After' panel of a hair loss reversal ad on the back of Which Saint? magazine

Do women have souls?, Jacques Moran asks himself. Yes, he decides, 'that they may be damned.'

Moran's theologically well-stocked mind is perhaps remembering a discussion at the Council of Macon in 585AD at which this point was debated and, not without resistance, the wise fathers conceded that women have souls after all.

Except that never happened! It's a myth, put about by two Reformation pamphleteers called Valentius Acidalius and Johannes Leyser.

Seizing on the ambiguous meaning of the Latin homo (a human being but also a young male), they attempted to find Biblical sanction for the absence of souls in the female of the species. The best they could do was a description of the Council of Macon in St Gregory of Tours' History of the Franks in which a bishop questions whether woman can be included under the term 'man'. The other bishops told him it could and that was the end of it.