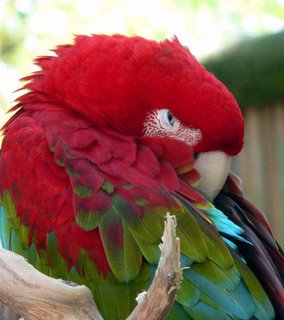 Many posts ago I squawked my admiration for N'kisi the parrot, an African grey with a vocabluary of almost a thousand words. I also trumpeted (not squawked) a possible real-life brothel-haunting original of the parrot in Mercier and Camier.

But there's more. 'A parrot, that's what they're up against, a parrot', says the Unnamable.

In Malone Dies someone called Jackson attempts to teach a pink and grey parrot to quote Locke. It manages Nihil in intellectu, 'but the celebrated restriction [quod prius non fuerit in sensu] was too much for it', leading to ruffled feathers all round.

And then in Molloy there's Sophie Lousse's parrot, with its 'Fuck the son of a bitch' catchphrase, alternating with 'Putain de merde!' That's the English-Molloy parrot; in French he says Putain de conasse de merde de chiaison, alternating with Fuck!

Yes I know the creature above is a macaw. Don't be pedantic.

The joke about avian flu and Fernando Morientes (lethal on the continent but looking fairly harmless over here) can wait for another day, or could do if I hadn't just succumbed and told it anyway.
Posted by puthwuth at 28.2.06