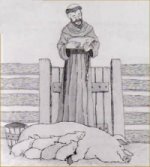 In the mood for a little company, the Unnamable pines for 'a face, how encouraging that would be. Worth ten of Saint Anthony's pig's arse.'

What with his busy schedule of being a hermit in the Egyptian desert, sitting around doing nothing and posing for that novel by Flaubert, you can imagine Saint Anthony's annoyance on being attacked by a vicious pig sent by Satan himself to slay the holy man. On declining to beat the animal to death, however, the saint was rewarded with its transformation into a loyal and friendly companion.

It became a tradition to give runt pigs to the Hospitallers of St Anthony at the hospital named after the saint in London. A 'tantony' is a runt pig. It also means a small peal of bells, named after the little bells the monks hung round their porcine companions' necks.

Anthony is also the patron saint of skin diseases. Camier calls a skin hospital 'the very thing for me' at the end of the novel in which he co-stars. The non-existent Jean du Chas's father (from 'Le Concentrisme') dies of a skin disease. Belacqua goes to hospital to have an anthrax on his neck removed.

In time little tantonies can grow up to be full-sized hogs, or castrated male swine raised for slaughter, as Willie helpfully defines them in Happy Days.

There are lots of swine in Malone Dies who suffer exactly that fate at the hands of Lambert (or Louis in the French; Louis Lambert is a novel by Balzac).

Perhaps the ideal, from Saint Anthony's point of view, would be a pig with a skin disease.

All offers gratefully received.
Posted by puthwuth at 2.2.06