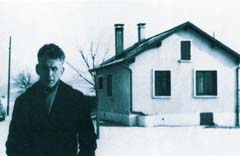 Beckett outside the house he bought in Ussy in 1953, the 'hole in the Marne mud' as he described it to Alan Schneider.

A neighbour once accidentally ran over Beckett's bicycle with his 2cv. The bicycle (I shall not call you bike) came in handy for trips to the next village along for the paper, as a refusal by the locals in Ussy-sur-Marne to sell him the land adjoining his house meant he preferred not to use the shops there.

Not many of Beckett's friends got to see where he did most of his writing in later years, but one frequent visitor was Henry Hayden, as described in Christian Bartillat's little book Deux amis, Beckett et Hayden.

And in the mirlitonnades, this salute: