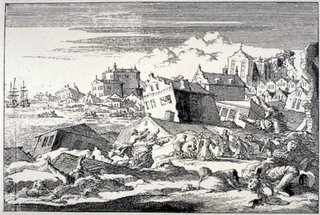 In 1755 a massive earthquake destroyed Lisbon.

Philosophers describe the belief that thought exists independently of external circumstances as the 'Lisbon Earthquake Error'.

In his Murphy notebook, Beckett quotes extensively from Fielding's Journal of a Voyage to Lisbon.

The earthquake gave Kant too a lot to think about, as captured in an image from Beckett's French poem ainsi a-t-on beau: sur Lisbonne fumante Kant froidement penché.

He clung on doggedly enough to the principle of disinterested judgement to write 'De nobis ipsis silemus' ('on ourselves we are silent', i.e. I leave myself out of the account) in the introduction to the Critique of Pure Reason twenty-six years later, and which the Unnamable quotes with despairing sarcasm. But when Watt talks about 'Lisbon's great day' I'm sensing the despairing sarcasm has just about routed the disinterestedness.
Posted by puthwuth at 18.2.06

This is completely irrelevant to the subject at hand but using the 'Murphy notebook' as an excuse to get my question in...

In Murphy, Beckett wrote "In the beginning was the pun". Having read the book and irked that I missed this great quote, I have a simple question - What page is it on in the Calder edition of Murphy? I'm trawling through it again and can't find it..