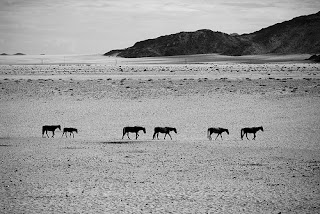 The romance of Irish Africa. Christian brother copybooks, which I can remember all too well, had a map of the world on the back with a circle round Ireland and arrows pointing to its various spiritual colonies, principally in Africa. St Martin de Porres, it still strikes me, must have been the only black person with whom I could claim to have had a personal relationship, back then.

Namibia, third-least densely populated country in the world. German Namibia. It made the news when Simon Wiesenthal died, an event marked by a gloating neo-Nazi ad in a national paper there. There was also the case a few years ago when a visiting German minister was greeted by swastikas flags and bunting in a backwoods German settlement. Which reminds me of a book I read once, author now forgotten, about lost white tribes, like Bernhard Foerster (Nietzche’s brother-in-law)’s doomed Nueva Germania cult in Paraguay (still there, counting their Aryan blessings on their sixth fingers and notching up hilarious links with Dick Cheney).

I remember mentioning its feral horse population here once. Its origins are unknown. Were they bred for an eccentric German baron’s cavalry? Were they washed ashore in a shipwreck?

You who deal in crystals, self-reflection,
Do well here. Who think in aeons,
Asteroid fallout, shattered mammoth bones,

Of your own Kalahari, passing through,
Panhandling, huge perspectives
In your eyes, and the ghost towns you outgrew.

Any takers for my Nua Hibernia colony in the Namib desert? We can survive on horse milk and nettle whiskey, with a sideline in no-questions-asked asylum for wanted Christian Brothers.
Posted by puthwuth at 28.1.08