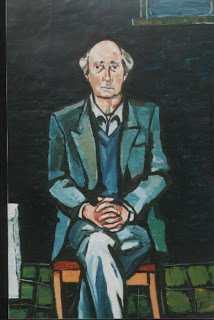 ‘Slowness is beauty’, wrote Pound, who, God knows, must have spent enough time standing in post office queues, submissions to small mags in hand, and getting something uplifting out of the experience that’s always escaped me. I thought of his apophthegm while wading through the lacustrine flux and reflux of John McGahern’s That They Might Face the Rising Sun lately. I think of that Paul Klee drawing, Two Men Meet, Each Believing the Other to Be of Higher Rank, the arcanely formalised ways of eating a sandwich or exchanging greetings in the church porch in McGahernland. It can test the patience though, sometimes, if it’s a world you know and have had reason to want to shake off. So I found myself coming out in a rash of Quintonians. Reader, Quintonians is a parlour game apparently invented by Iris Murdoch in which you invent the things people are least likely to say. Some McGahern character Quintonian soundbites then. I do think it’s a great book, I should add, first.

‘Hello? Yes? You want to what? Come in for a cup of tea? Because what? You’re my neighbour? Christ, you’d think the Poles or whatever would have bought your lot out by now.’

‘Ah God rest your father, he was a grand man. He was a depraved sadist too of course, and a bit of a kiddy-fiddler to go with it, but sure the dogs in the street know that.’

‘Those ham sandwiches would feed an army of marching men, Kate. But if you don’t mind I’ll have a sundried tomato ciabatta please. And did I mention the cappuccino machine they’ve got in Mrs Mullarkey’s café in town? It’s beats the hell out of this tea slop you serve up, and that’s for sure.’

‘No Jamesie, it’s my round, I insist. What? The Ukrainian wheat beer this time? You devil you. There was a time when the only wheat beers you could get in here were German, Belgian and Czech, but times are changing and who am I to stand in their way.’

‘You know very well I can’t bale your hay for you on Friday, Johnny. I’m awful sorry but Friday is my internet pornography day and I get terrible restless when I miss it’ (with apologies to Peter Griffin).

‘That was a powerful evening of chat and whiskey, Jimmy, but I was thinking the other day, pondering to myself like. You see, you are a toothless simpleton, I’ve been having the same conversation with you every day for the last thirty years, and if you ever, ever, address another word to me I will take this pitchfork and stick it so far up your slurry chute I’ll still be able to bale the hay once the spikes have come out your eyes. Do I make myself understood?’