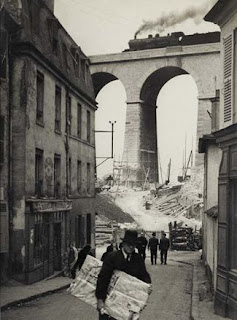 That’s not , it’s Meudon in , as photographed by André Kertész. True, but something in this image always summons up a particular fleeting landscape for me: (resonant name), midwinter, its sheer-walled apartment blocks and flyover at the end of the street, and attendant passport to anywhere you’re having yourself. But is destination enough, for me. I mention since Valéry has been in the air, hereabouts, of late, and I am reminded of the superb translation of Valéry in Justin Quinn’s Waves and Trees. ‘Boating’, in JQ’s English:

I’m carried by deep water under bridges,
vaults full of wind, of murmurs and of night.
Their heavy adzes cut the flowing light,
their portals not as firm as their proud edges.

Their night last long. Soul’s labour and its leisure,
the soul itself bows down before this zone.
And when I’m moved beneath its roof of stone
I’ve only scorn for all that idle azure.

I’m also reminded of JQ’s translations by the arrival in the post today of Six Czech Poets, for which he has Englished Petr Borkovec. From ‘Natural Causes’:

And in the sand you see all that’s beyond you.
And in the air, what your words won’t transform.
From flap to flap beneath the circus tent
the taut rope goes from yesterday’s performance.

And no, the sleeping acrobat resembles you
in nothing. The caravan dreams in kohl.
Letter and steppe dream of their blackness.
Angrily, like a dog, fatigue dreams of its bowl.

Noticing that Ron Silliman had mentioned Borkovec on his blog, JQ suggested to me that Silliman had obviously decided that a Czech poet could only be post-avant because of all those diacritics (honk honk). If onlý it wěrě that símplě!

Not to be diacritical (honk honk), but I mention poets of all types on my blog, from cowboy poets to new formalists.