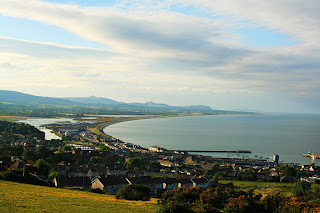 There was always a powerful lot of men in the village on Sunday after church or mass outside Cullen’s waiting to see Mr Holt. He was the big man and you’d see crowds of them waiting in the yard to be paid, still in their suits or what have you. He’d hand over the money and ask, Will you have a drink while you’re here? – and they’d buy him a drink out of the money he’d given them, and if they didn’t they knew full well he mightn’t be so generous with the work the next week. My father had some business with him one day and walked down to the village, and left me outside on the low wall. Oftentimes you’d get the travelling people down from Calary too, about a horse or some scrap, and to see them ride in you’d think you were in the Wild West, but there was never any trouble, not in them days. Anyhow that’s when I seen Billy, that’d be Billy King had been in and come back with a bit of a want in him. You’d see him around the main street, chasing after the young ones. There was a knot of men on the wall, corner boys, was pushing at Billy the way he didn’t know what way to turn, and jeering at him and asking where was he in Easter Week. Billy was down on his hunkers with his hands on his head while they stood round him, terrible it was, there was no call for that kind of thing towards a poor simpleton. I went over, all innocent, and pushed through the circle of men so as to hunker down beside him, telling them to stop and to leave him alone. I could see under his hands where there was tears on his face. Then he took his hands away and stared at me and all of a sudden let a big yelp out of him: ‘Bang bang you’re dead.’ He pushed at me when he said it so I fell over, and a big grin on his face. I ran off and the men started back at him after that, and I wasn’t too bothered if he got a kicking off them or not. I ran into the yard where my father was and he told me not to be messing and to run up and tell my mother when he’d be back for his dinner. I never spoke to Billy after that, though I was sorry when he died after. There was a terrible stink in the house when they found him, my father said. My mother would often say Billy was coming to get me when she was after giving me a slap for something I’d done, but that was back in the 20s, God rest him, and sure no one remembers him now!