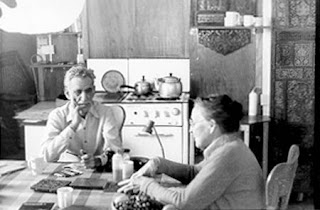 A lengthy and now-deleted diatribe by Todd Swift about the London publishing scene, and a link on Silliman (you see, he has his uses) have put me in mind of George Oppen, whose centenary year it is. The Silliman link is to a James Longenbach review in The Nation of his Selected Prose, just out. What I love, or one of the things I love, about Oppen is the absolute rightness of his attitude towards being a writer. Discrete Series appeared in 1934, when he was 26. Thereafter he abandoned poetry until The Materials in 1962, spending the intervening years organizing a farmers’ union strike, earning a purple heart in the second world war, and working as a carpenter in to avoid a call-up to the House Un-American Activities Committee. To the business side of being a writer, the question of publishers, prizes (even if he did end up with a Pulitzer), going around impersonating himself in public (as Larkin would say), he displayed the only possible praiseworthy attitude, namely total disregard. As a political activist with a strong distaste for agitprop he found actions more important than words, and so, entirely logically, devoted himself to actual politics rather than the dubious honour of being a political poet. To his own question, ‘Is it more important to produce art or to take political action?’, he replies:

The writer does what he is most moved to do. He or she is concerned with bringing a small adventure in thought and feeling to term. Write about politics, if you want, but if you fancy doing some actual good join a charity and come back when you’ve finished. And as for the whole clamjamfrie of how others might see us, how we are to sell our wares to someone who doesn’t want to know, from those who read poetry for its politics, to the despised but somehow all-important London publisher, to the overawed reader steered by the publisher’s imprint on the spine (sorry, this list of miscreants is inspired by the aforementioned deleted diatribe; apologies for not being able to link to it for context)... to anyone but the unknown and anonymous reader, whose reasons for reading we may never know, the writer should cultivate an absolute and unwavering indifference. It’s simply none of his or her business. Who wants that other kind of reader anyway? No one. Write on the presumption that even your friends won’t read you. In fact, positively discourage them from reading the stuff. This is something I feel Oppen taught me, and rubbed in properly, and I’ve felt the benefits ever since. Here is ‘The Gesture’, the first of Oppen’s ‘Five Poems About Poetry’:

The question is: how does one hold an apple
Who likes apples

And how does one handle
Filth? The question is

How does one hold something
In the mind which he intends

To sell? The question is
When will there not be a hundred

Poets who mistake that gesture
For a style.

Interesting blog and it looks like we could all learn something from Oppen. What's up with you though - fallen out with your publisher or something?

The reference to the London publisher was in reply to the complaints about London publishers in Todd Swift's now deleted post --my point here is that authors should not see their work as targeted as all-important authority figures, or written with one eye on what they or anyone else thinks.

Targeted at, that should read. Aagh.